Our image of Victorian and Edwardian Montreal and surrounding areas is to a large extent the result of the work of William Notman and his sons. As studio photographers, the Notmans are especially well-known for portraits of people wealthy enough to afford to have their pictures taken; although 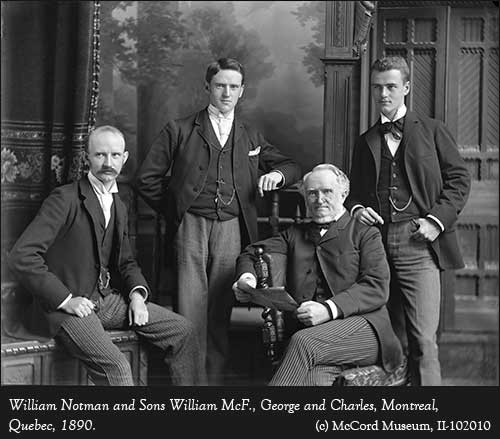 Notman prices were deliberately competitive, they were beyond the means of most working-class people – who nevertheless do appear in the background of many of the street scenes that the Notmans were also famous for. Indeed, it is these urban landscapes, intended to capture the city in all its visual diversity, to which we owe so much of our awareness of Montreal’s past. From the construction of the Victoria Bridge in the 1850s to the digging of the railway tunnel under the mountain at the time of the First World War, the city industrialized and expanded under the gaze of Notman cameras.

Although William Notman studied art in Glasgow, his professional background was in the family wholesale cloth business, and after moving to Montreal in 1856 he worked for dry goods merchants. Having experimented with photography in his youth, Notman was excited to learn of the innovative collodion process recently invented by Frederick Scott Archer, which marked a distinct improvement over the classic daguerreotype. Although laborious to prepare, Archer’s glass plate negatives could be used to produce any number of prints, cheaply. The process was rapidly gaining in popularity across North America, and Notman saw that there was money to be made in Montreal. With a generous loan from his employers, Notman purchased a camera, rented space on Bleury Street just a short walk from the St James Street business district, and opened a studio. He quickly acquired a clientele, and by the spring of 1857 was employing several assistants, alongside his wife Alice who served as receptionist. 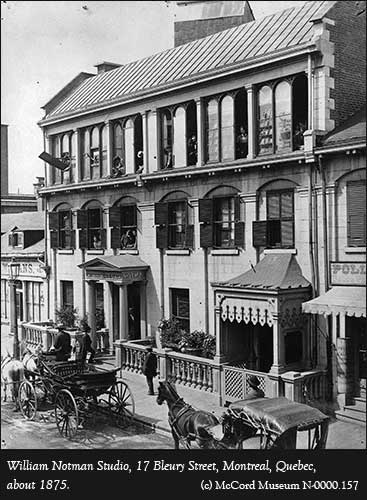 A career-making moment came the following year, when the directors of the Grand Trunk Railway commissioned him to document the nearly-completed Victoria Bridge (the “eighth wonder of the world”) across the St. Lawrence River. When the Prince of Wales visited Montreal to inaugurate the bridge, Notman presented him with an elegant photo album that apparently so delighted Victoria herself that she declared Notman “Photographer to the Queen” – a title he subsequently flaunted. The Notman business grew, and employed more staff, including William’s brothers, nephews, and eventually his three sons. By 1876 there were 55 on the payroll. In that year, the family moved from their living quarters behind the studio to a grand house on Sherbrooke Street, where they had the Molsons as next-door neighbours.

Notman’s success was partly due to a clever sense of marketing, but he was also a skilled technician. The portraits of individuals or small groups are models of lighting and composition, but he was particularly innovative when it came to his famous “composite” photographs in which individual figures were cut out and seamlessly pasted onto a larger scene to suggest dozens or even hundreds in a room or – what was impossible using conventional means – outside. He also specialized in stereoscopic photographs, which involved two slightly different images placed side-by-side and viewed through a special device called a stereoscope which blended them and gave the subject a “3D” effect. Notman acquired a special camera with two lenses to take the required double images; these photos were especially popular with tourists. 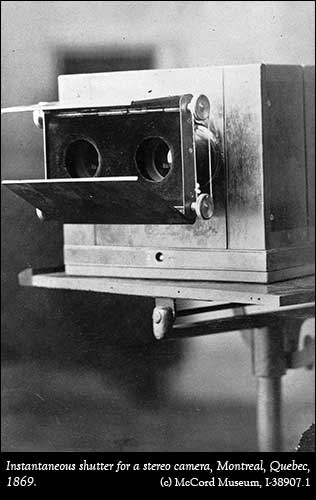 William Notman worked tirelessly at the business until his sudden death from pneumonia in 1891. The eldest son, William McFarlane, inherited the company and ran it until his own death in 1913; the youngest brother, Charles, who had been a junior partner for many years, took it over. Like their father, both brothers served the public as portrait and urban photographers. To expand the Notman clientele, they moved the studio uptown to quarters in the new Birks jewelry story in fashionable Phillips Square. They also modernized the business with state-of-the-art photographic equipment such as the Graflex line of cameras manufactured by William Folmer of the Eastman Kodak Company of Rochester, New York. They did not keep the family house on Sherbrooke Street, however; it was sold to the Drummond family, who turned it into a residence for people with physical and mental disabilities, a function it retained until the 1990s. Forty years after moving out of the house, Charles returned in 1933 to take a photo of the interior of the St. Margaret’s Home. Two years later, wishing to retire, he sold the studio on condition that he be allowed to stay on as director of the Notman collection of photographic plates, which he did until his death in 1955.

The purchaser of the Notman studio and its collection was Associated Screen News (ASN), Canada’s largest private production company, whose offices were in Montreal’s Notre-Dame-de-Grace neighbourhood. The ASN was essentially a subsidiary of the Canadian Pacific Railway, specializing in films that celebrated Canada as a tourist destination. Much of the Notman collection complemented this focus, notably the photos that both William McFarlane and Charles had taken on several journeys across the country. One of the photographers recruited into the ASN after the war was George Dudkoff, who had learned his craft developing movies taken by RCAF Spitfires. Dudkoff was sent to Banff, Alberta, as photographer-in-residence at the Canadian Pacific hotel there, and then to the Caribbean, as a photographer on CP cruise ships.

When ASN began restructuring its holdings in the mid-1950s, Dudkoff and a colleague decided to buy the Notman studio, which meant they acquired the equipment, a portion of the photographic plates, and the right to use the Notman name on their studio located on Crescent Street. The rest of the collection, after much negotiation and fundraising, was bought by McGill University in 1957 and eventually deposited in the McCord Museum. In 1978, Dudkoff donated many of the negatives in his possession to the Notman Photographic Archives at the McCord. When he retired in 1993, he gave up the rest of his collection, including classic cameras used by the Notmans to document eight decades of Montreal’s (and Canada’s) history.

I am a Century camera that William McFarlane Notman acquired from the Folmer Graflex Corporation (later Eastman Kodak) of Rochester, New York, at the beginning of the twentieth century. I was used to produce 8”x10” glass plate negatives from which countless high-quality prints could be made. I was later bought by Associated Screen News photographer George Dudkoff and donated to the Notman Photographic Archives at the McCord Museum.

A cloth salesman turned ambitious society photographer, William Notman launched a family business that would last nearly 80 years. The result was the documentation of Canada from shore to shore, along with its leading citizens. Above all, however, it was a detailed portrait of Montreal’s evolution from the dawn of the industrial revolution to the Great Depression.