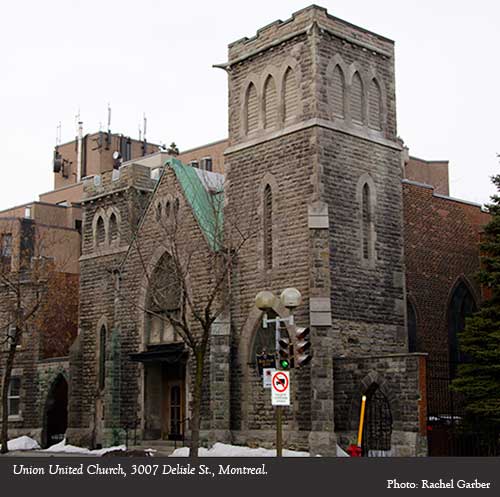 The baptismal font’s smooth lines create elegance in its simplicity. It stands 91 cm tall with a basin width of 31 cm. The marble font has a small plaque on it that reads, “Presented by the Women’s Club of the Union Church, Feb 3rd 1929 in loving memory of our late member MINA DELARY GATES, January 20th 1928.” The plaque speaks to the connection between a group of women and their ability to organize, finance, and obtain this font, thus maintaining a connection with one of their deceased members. In the Hostess Book, Mina Delary Gates is “noted as the daughter-in-law of Mrs. Gates. Arlie Gates was Mina’s husband and he was a projectionist and worked in a Montreal movie theatre.”

The Women’s Club of Union United Church is one of the many groups—committees and auxiliaries—that were created to help meet the needs of all members of the congregation and the needs of the broader Black Anglophone community.

A minister who embodied this aspect of service that characterizes Union United Church was the Reverend Dr. Charles Humphrey Este, who “dedicated more than 40 years of his life, not just to the Church, but also to Montreal’s black community.” 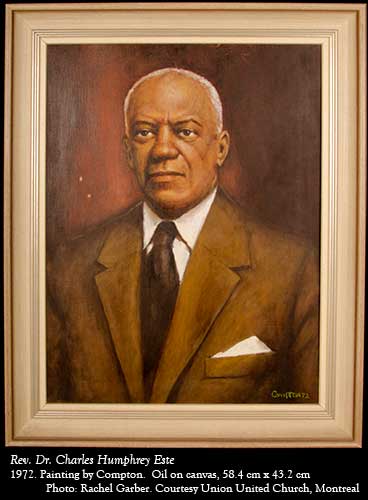 Reverend Este was born in Antigua. “In 1913, a CPR agent lured nine Antiguans to Canada - including Charles Este, future Reverend of Montreal's influential Union United Church - with hollow promises of lucrative employment.” Once in Montreal, Reverend Este studied for the ministry at the Congregational College of Canada until April 1925. In 1923, the then Union Congregational Church asked him “to be its student-pastor for the 1923 summer. His performance was so satisfactory that his office was extended until May 1, 1925.”

Reverend Este served as the minister of Union United Church from May 1925 until April 1968. (Union was a charter member of the United Church of Canada, a new ecclesiastical body that was formed on June 11, 1925.)

During his 43 years as the minister of Union United Church, Reverend Este not only led his congregation, but was also an “active member and chaplain of the Universal Negro Improvement Association...and founded the Negro Community Centre.” The Black community turned to Union United Church and the Reverend with their questions and concerns. Reverend Este “became public health officer, immigration consultant, social and community worker, anti-discrimination activist, remedial education teacher, and recreation animator...In the Fall of 1927, therefore, Rev. Charles Este suggested to the congregation that a Negro Community Centre was an immediate necessity.”

Union United Church continues to carry through the covenant of its founding mothers and fathers by fulfilling the duties of Christian fellowship through service to the Black community.

Author
Whether editing or writing, Blossom Thom thrives while immersed in words. She is able to work on both sides of this cloth by understanding language and remembering its pleasure. Raised in Southern Ontario, Blossom's heart led her to Montreal, Quebec where she now makes her home.

I am the baptismal font that stands in the sanctuary of the Union United Church in downtown Montreal. Generations of families from the congregation have stood beside me and made a promise to God that they would raise their children in a community of faith. I have witnessed how the sacrament of baptism keeps my congregation connected together through memory and tradition.

The Union United Church was “formed in 1907” and was originally baptized as the Union Congregational Church. The covenant set by the founding members speaks of the “privilege and duty” of Christian fellowship. The congregation and ministers of Union United Church worked to ensure that the needs of all members of the congregation and the needs of the broader Black Anglophone community were met. The tireless leadership of the Reverend Dr. Charles Humphrey Este from 1925 to 1968 and the use of the marble baptismal font for each baptism exemplify how community is created and fostered within the congregation and the larger Black community.