In 1907, Montreal’s Unitarians moved up in the world. They were proud to be the earliest Unitarian congregation in Canada, and since 1844 their church had been located at the corner of Beaver Hall Hill and la Gauchetière, within sight of the busy port. It was a desirable location at first. But with members of families like the Van Hornes, the Morgans and the Molsons among its congregation, the Unitarians were not short of money. In 1905, having bought an empty plot of land at the northeast corner of Sherbrooke and Simpson Streets in the city’s celebrated “Square Mile,” they began to construct a big stone church in what a later minister, Charles Eddis, has described as a “grand Tudor gothic” style. 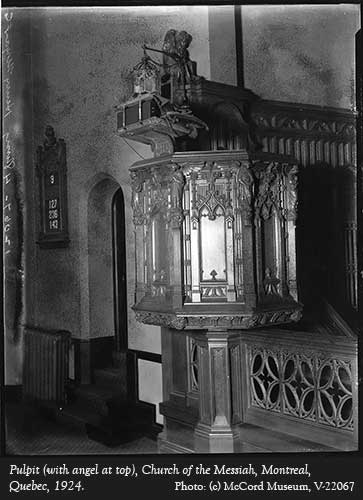 The architects of the Church of the Messiah, as it was called, were the Maxwell brothers of Montreal. They also designed the Montreal Museum of Fine Arts, the Legislative Building of Saskatchewan, and part of the Château Frontenac in Quebec City. Different members paid for different elements of the church. The stained glass, which included a magnificent Nativity window, came from the Bromsgrove Guild of Applied Arts in England. The glass in the lanterns and lighting fixtures arrived from Tiffany & Co. in New York.

The pulpit, standing in a raised position near the northwest corner, was made from dark oak in the Montreal workshops of Henry Morgan and Co. – the family who owned Canada’s first department store, located on Ste. Catherine St. a short walk away. (The store would remain in their hands until the Hudson Bay Company purchased it in 1960.) James Morgan was so determined that the pulpit should do full honour to his parents that he rejected the first version and commissioned a second. A scroll encircled the base. An angel poked its head over the top.

For decades the church thrived. It was a bastion of liberal Protestantism in a mostly conservative and Catholic province. One of its members, the judge and poet Robert Weir, wrote the English lyrics to “O Canada.” In 1964, when Richard Burton and Elizabeth Taylor got married in the Ritz-Carlton Hotel a couple of blocks along Sherbrooke Street, they called on the Unitarian minister of the day, Leonard Mason, to perform the ceremony. (Civil marriage was not legal in Quebec at the time.) Longtime Unitarians recall that when Mason was preaching and needed to pause for a moment to gather his thoughts, he would often look at the angel on his right. It had a sober demeanour, curly hair parted in the middle, and very large wings.

With the migration of many English speakers out of Quebec in the 1970s and 80s, the Unitarian Church of Montreal fell on hard times. Maintaining the Sherbrooke Street building was a challenge to a dwindling congregation. But its destruction came as a terrible shock. One night in 1987 a mentally ill organist set fire to a big pile of music; the blaze caught hold; in a vain attempt to save the building, two firemen died. Most of the contents of the church were destroyed, including the Nativity window, the Tiffany lanterns and the wooden tablet in memory of Robert Weir. Among the items that somehow survived was a smoke-damaged angel.

The congregation went on meeting in a hall on Simpson Street just north of the charred ruin. It would remain a picturesque eyesore for decades until finally an elegant condo development rose on the site. By then the Unitarians had moved to a new, light-filled building near Vendôme Metro station in NDG. A few small fragments of stained glass from the Church of the Messiah now overlook de Maisonneuve Boulevard, not far from a cornerstone saved from the even older building on Beaver Hall Hill. As for the wooden angel, it remained in a basement cupboard for more than a decade until it was refurbished and installed in a new location, overlooking a stairway that leads down to the children’s area. The angel’s eyes are downcast, as though remembering past glories or burning pain.

Today the Unitarian Church of Montreal – no longer the Church of the Messiah – finds itself in a very different social position than it did in 1907. Its active members no longer include the city’s business élite; the majority would not identify themselves as Christians; many speak French or another language as their mother tongue. The new building is on a modest scale compared to its hulking predecessor. But the wooden angel remains, a powerful symbol of endurance in the face of adversity, and a testament to a spiritual thirst that may be stronger than fire.

I am a wooden angel, accustomed to staring down at the congregation in a big church in downtown Montreal. I did this for 80 years until in 1987 the church was destroyed by fire. Most of its treasures were ruined but I survived, somewhat the worse for wear. When the congregation moved to a new building, I spent years in a basement cupboard until I was brought to light again and installed above a stairwell. Now I peer down at children and teenagers heading to and from their classes in religious education.

In 1907 the Unitarian Church of Montreal moved into a large stone building at the corner of Sherbrooke and Simpson Streets. A liberal Protestant denomination, it included some members of great wealth. The Morgan family – owners of Canada’s first department store – paid for the construction of an elaborate oak pulpit and other furniture in the chancel. The pulpit included a prominent wooden angel. Eighty years after its opening, the building was destroyed in a blaze that took the lives of two firefighters. But the angel survived and can now be found in the replacement church, a modern structure in Notre-Dame-de Grace.