The material remains of former economic endeavours often illustrate much about the societies in which they flourished and then declined. A good example of this is the large wooden cashier's cage door that originated in the now disappeared Paspébiac general store of the "Robin, Jones and Whitman Company." It was the habit of the "Robin, Jones and Whitman Company" to show the date of construction of a new store above the main entrance. In the case of the Paspébiac store, the date 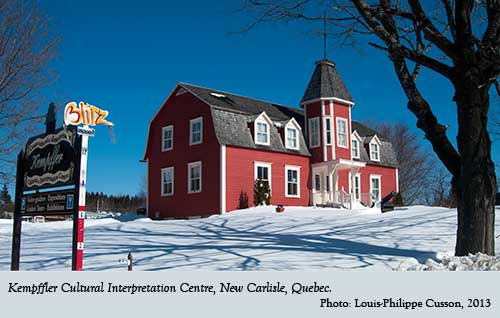 over the door was 1908. Unfortunately, the store was destroyed by fire in 1964. This six-foot by two-foot cashier's cage door is one of the few remaining items from the store, and is now in the Kempffer Cultural Interpretation Centre in New Carlisle.

The door was made of varnished wood with a gold painted metal screen. In the store, the cashier's cage itself was an extension of the manager's office and it was situated on a wooden platform reached by climbing 4 or 5 steps which placed it high above the counters of the main floor. The cashier dealt with all transactions. Bills were made out by the clerks below, behind the counters, and sent with payments in small cups attached to an overhead track that ran the length of the store. Change and receipts would be sent back by the same route. The platform brought the cashier within reach of this overhead system. The method of overhead tracks for moving goods and/or money was fairly common in stores into the early 20th century, but this installation of a cage where the cashier sat inside appears to be rather unique.

The "Robin, Jones and Whitman" general store in Paspébiac, was the largest of a chain of 22 stores and fishing establishments belonging to a company founded in 1766. The Robin Company, in all its forms since then was the second oldest company in Canada, with only the Hudson's Bay Company being older. This chain of Robin's establishments along the Gaspé coast, the Lower North Shore, New Brunswick and even Nova Scotia, were important to the development and expansion of the English- speaking communities in these regions. From the earliest days of the company, apprentices were brought out from the Channel Islands every year to fill positions in the growing fisheries with their accompanying general stores. Many of these men became prominent in local Quebec and Canadian government, founded schools and churches and branched out with other businesses.

Charles Robin, founder of the company, was born in Jersey, Channel Islands, in 1743. He had an active and successful business life in Gaspé beginning in 1763. For approximately 40 years he was a successful businessman and then retired back to Jersey where he died in 1824. The company was then run by his two nephews, Philip and James Robin. The Channel Islands, although under the British Crown since 1204, were (and remain) the tiny remnants of the Duchy of Normandy. At the present time, very few of the people of the Channel Islands are French first-language speaking. An association called l'Assembliée d'Jérri, is working diligently to preserve the old Norman French.

As the original language of the Channel Islands was French, they had long been a refuge for Protestants (the Huguenots) escaping from persecution in France. Through the political and trade links with England, most of the Islanders became proficient in English, so Robin brought with him to his fishing establishments a compatibility with the language and religion of the English-speaking communities on the Gaspé coast. The Robin employees were bilingual and Protestant, but it has been noted that, unusual for their time, they were also tolerant to Catholics, donating money for churches and projects.

Robin and his colleagues had a definite advantage in being bilingual with many good connections to France as well as England. The population of the Gaspé coast was very mixed from earliest times with Basque, Portuguese, Acadian, Norman, Channel Island, Loyalist and other British Isles roots, as well as the indigenous Mi'kmaqs. All these people were part, directly or indirectly, of a fishery based economy. The Robin Company had an almost complete monopoly on this trade. They sold goods on a credit system, based against the future catches of the fishermen who were also their employees. This kind of “company store” business practice thrived among other Canadian primary resources such as mining and lumbering well into the 20th century.

Robin's company was adversely affected when the banks in Jersey failed around the turn of the 20th century. The business ultimately emerged from this crisis as “Robin, Jones and Whitman” with a head office in Halifax. In the early years of the 20th century, they were the dominant traders in the Gaspé fisheries.

Their Paspébiac establishment was the largest, and included a fish processing area on the beach. The LeBoutillier fish warehouse was the largest wooden building in North America for many years after its construction in 1845-1850. The Robin general store was on the main road that passed through the village, and was, as in other small coastal towns, the centre of activity for the population. It was a source of employment, and a meeting place to exchange news and share ideas. Often the Robin employees were the only English speakers in some villages. When “Robin, Jones and Whitman” went out of business in the early years of the 21st century, it was a loss to the cultural and social heritage of Gaspé.

Along with the cashier's cage door, the only other remnant of the 1964 fire that destroyed the Paspébiac store is the large concrete Strong Room – the Coffre Fort – that stored money and documents.The Strong Room was not part of the store building.This odd looking shed-sized structure still stands on the site of the "main office" less than a kilometre to the east of the original store. A service station now occupies the corner lot where the store once stood.

The beach area now has become the Banc de Pêche de Paspébiac historic site and 11 period-buildings have been restored, including the enormous LeBoutillier warehouse. There is still a fishing industry around Paspébiac (mostly lobsters), but this is considerably reduced from the great cod catches of years ago. Now the major economic force is recreo-tourism, with an emphasis on heritage preservation.

Lynden Berchervaise has lived all his life in New Carlisle. He was a teacher, principal and Director General of the Gaspesia School Board, and has organized several community and regional actions along with many very dedicated volunteers.

With special thanks to Betty Le Maistre for her contribution and research.

I am the cashier’s cage that was on a high platform above the counter tops in the Paspébiac general store of the “Robin, Jones and Whitman Company.” Each day a cashier would sit behind me to deal with all of the cash transactions occurring down on the store floor below. Change and receipts would make their way to me through a series of overhead tracks. I represented security and “high” finance.

Charles Robin (1743-1824) was an entrepreneur and businessman from Jersey who settled in the Gaspé in the 1760s and seized a business opportunity to exploit the fisheries of the region. Robin constructed ships at Paspébiac at the rate of about one every two years. Between 1792 and 1824, he and his successors built 16 ships in all. He set up a chain of stores at his fishing stations along the coast to supply fishermen with whatever they needed for their boats and their families. Everything functioned on the “truck system” - no money changed hands. The fishermen would come to the store in the spring to get what they needed for the summer’s fishing, and then they brought their cured or raw fish to Robin to pay for it. Once hooked on credit, however, the fishermen found it virtually impossible to escape their indebtedness, and Robin was ensured of a dependable labour force. His company extended to include general stores and fishing stations all along the Gaspé, and he exported 15,000 to 17,000 quintals (kin’tle, equivalent to 112 pounds) of dry cod each year to ports in Europe. Charles Robin’s firm dominated the economy of Baie des Chaleurs for two centuries.