The Celtic Cross on Grosse Île

Of all the English-speaking groups to immigrate to Quebec, it is the Irish who have arguably had the biggest impact on the culture and heritage of the population of Quebec. It is estimated that 40 per cent of the population has some Irish ancestry.

Between 1845 and 1849 alone, over 200,000 Irish immigrants disembarked in Quebec. Many settled the land, married their French neighbours and infused Québécois culture with their heritage and their music. Both the English-speaking and French-speaking communities are proud of their Irish roots. The Irish ancestry of many, like that of Brian Mulroney and Claude Ryan, is obvious because of their surnames. The Irish ancestry of others, like that of Louis St-Laurent and Jean Charest, is less so because it came from the maternal line. There are cases where an Irish name is buried in what is initially perceived to be a French name. For example Louis Riel descended from 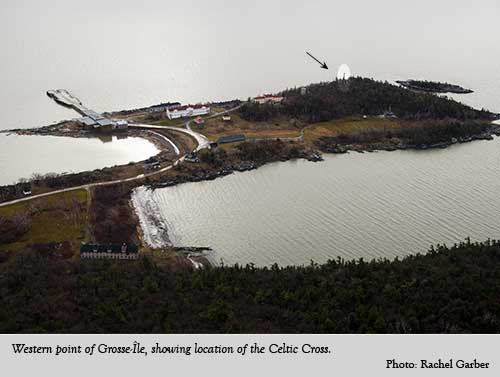 an Irishman named Jack Reilly, a native of Limerick who had changed his name to Jean-Baptiste Riel when he married in Boucherville in 1704.

The Irish did not have an easy start here, especially the ones who arrived in the 1840s fleeing the Great Famine in Ireland (1846-1848). For many, the immigration experience itself was a horrendous struggle to stay alive, both on the “coffin ships,” then at the quarantine station at Grosse Île.

It is hard to imagine anything more representative and evocative of the Irish presence in Quebec or in Canada than the Celtic Cross which stands on Grosse Île. The Celtic Cross is a lasting memorial to those who died on Grosse Île in 1847, both the immigrants and those who tried to help them. Erected in 1909 by the Ancient Order of Hibernians, an Irish Catholic fraternal organization, this large Celtic cross of grey granite from Beebe (Stanstead), Quebec, was unveiled high above the water on the rocky promontory at the western end of Grosse Île. The monument itself is 14.18 meters tall. On each side of the pedestal are inscriptions carved on panels of dark granite. On the side facing the mass graves and the Gulf of the Saint Lawrence beyond, an inscription in Irish reads:

Children of the Gael died in their thousands on this island, having fled from the laws of the foreign tyrants and an artificial famine in the years 1847-1848. God's loyal blessing upon them. Let this monument be a token to their name and honour from the Gaels of America. God save Ireland.

Equally moving are the French and English inscriptions, though they do not assign blame. 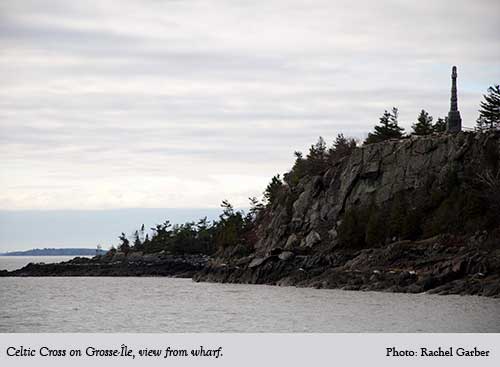 To escape the disease, starvation and oppression in Ireland, hundreds of thousands fled to North America. Between 1845 and 1849, the population of Ireland was reduced by more than two million. Half of these died there from the famine and disease. The other half left with nothing but desperate hope for a better life. For those immigrating to Canada, Quebec City was the main port of entry. Although similar difficulties with immigrants were experienced during the cholera epidemic of 1832, no one anticipated the numbers and the extent of disease to come in 1847 when 100,000 desperate emigrants arrived. These “coffin ships,” overcrowded with Irish from Limerick, Cork, Dublin, Sligo and Belfast, contained triple the number of previous years. After an Atlantic crossing of 30 days or more, and a waiting period of more than 20 days, typhus and cholera had spread uncontrollably. At Grosse Île another 5000 deaths were added to the 5000 that had already died en route, their bodies thrown overboard.

The quarantine station at Grosse Île had been established to welcome and screen immigrants in poor health. By June of 1847 the small and inexperienced staff was overwhelmed. The station was designed to separate the ill from healthy individuals, and to care for the sick. Tragically, the Irish 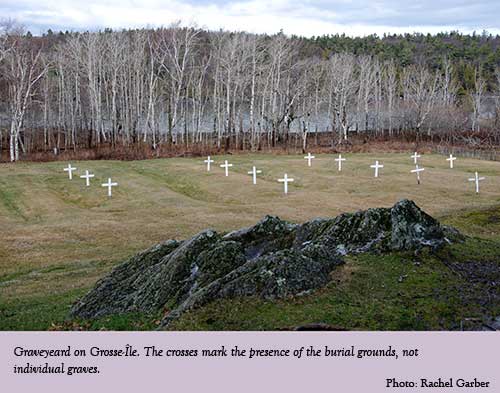 immigrants arriving in the thousands, many weakened by the ocean crossing, fell victim to cholera, typhus and other diseases. The backlogs of people waiting in the overcrowded, unsanitary ships were vulnerable to infection. All this led to an uncontrolled, explosive situation. Many sick people died and many healthy people subsequently became ill and died. Also, many apparently healthy people allowed to proceed to the mainland were in fact contagious. In that tragic year, 5,424 people died and were buried on Grosse Île.

By the early 1900s there were fewer immigrants arriving, and advances in medical knowledge made the quarantine station less necessary. The Grosse Île station was closed in 1937; the site was subsequently used by the government for other purposes. In 1984 the historic significance of the island to the Irish immigrant population of Quebec and Canada was recognized by making “Grosse Île and the Irish Memorial” a National Historic Site of Canada maintained by Parks Canada.

Knowing the tragic history of Irish immigration makes viewing this stark monument on Grosse Île a moving experience and a poignant reminder of the Irish heritage in Quebec.

Note: The island and the Celtic Cross are accessible by ferry during the summer up to the end of September.

Author
Jacqueline Hyman is a writer and lives in the Eastern Townships. She is a member of the Board of Directors of the Eaton Corner Museum in Cookshire-Eaton, Quebec. Joseph Lonergan, a native of Quebec City, taught at St. Patrick’s High School until his retirement in 2006. An amateur historian, he is currently President of Irish Heritage Quebec, a local historical and genealogical society.

I AM the stone cross that stands on Grosse-Île as a witness to human suffering and despair. I mark the site where thousands of poor Irish souls came seeking refuge only to find their grave. I stand on the western point to remind those who see me that these dead are not forgotten. God save Ireland.

The Celtic Cross that stands on Grosse-Île, a small island in the St. Lawrence River near Quebec City, is a poignant reminder of the tragic fate of thousands of Irish emigrants in flight from the Great Hunger of the 1840s. Established as a quarantine station for European immigrants to Canada in 1832, this island’s purpose was to contain contagious diseases such as cholera and typhoid before passengers entered the port city of Quebec. The authorities could not foresee the tragedy that was to occur at the station during the typhoid epidemic of the late 1840s. In 1847, over 100,000 immigrants, mostly from Ireland, arrived in a single season. The facilities at Grosse-Île were quickly overwhelmed with the sick and dying. Over 5,000 died on board the ships at sea or waiting to disembark at the island and 5,000 more died at the station itself. The Ancient Order of Hibernians resolved to create a memorial to the stricken Irish and to protest on their behalf their ill treatment by the British Crown.