Published on Jun 3, 2013
This video is about the diverse identities and complex heritage of Chinese immigrants in Quebec, focusing on Chinatown in Montreal, Quebec. Lion dances were filmed on Chinese New Year's Day on February 10, 2013. It features short interviews with Anna Xu of the Montreal Chinese Community and Cultural Centre, and Doris Ng Ingham, researcher for the film Being Chinese in Quebec. It shows a 15-metre long Chinese Dancing Dragon, which is Object No. 93 in the English-speaking Quebec in 100 Objects, a project of the Quebec Anglophone Heritage Association (QAHN) in Quebec, Canada. Visit 100objects.qahn.org to see the story of this object, and photos and stories of 99 other fascinating objects that together form a portrait of the English-speaking minority in Quebec.

The Chinese Communities of Quebec

Finding one single object to represent the Chinese in Quebec is a difficult task as there is not one Chinese community, but many Chinese communities with different backgrounds, histories and cultures. One symbol of all Chinese people however, is the dragon, a mystical creature that has captured the imagination of people throughout history.

The Chinese dragon is portrayed as a long animal with four legs. Unlike Western culture, it is not an animal to be feared, but rather a noble symbol of good fortune, benevolence, perseverance and strength which is sometimes used to refer to Chinese people themselves. If we look at Sino-Quebec history in the province, the dragon will justify this self-depiction as Chinese people struggled through history in the search of a better life, despite obstacles such as languages barriers, discrimination and conflicts. 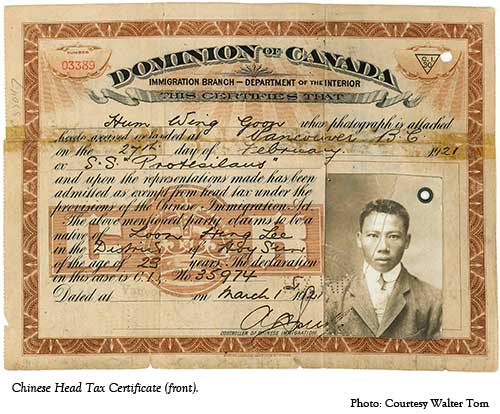 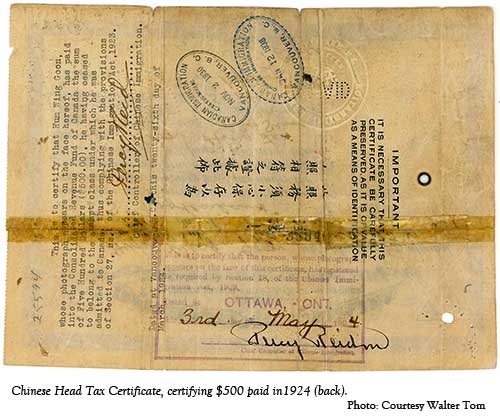 The first major wave of Chinese citizens arrived in Quebec in the late 1880s. They were young men of modest means from the southern countryside of China, each of them speaking a variant of the Cantonese language. They were fleeing an impoverished and unstable China and believed that they were heading to the “American Eldorado” known to them as “Gold Mountain.” Needless to say that once in the country, this idea of a land of plenty vanished. Most of them found work on the construction of the Canadian Pacific Railway and after its completion, they became involved in the restaurant or laundry business.

In order to reduce an influx of Chinese arriving in Canada, the Canadian government introduced a series of immigration policies directed solely at this cultural group. In 1885, the Canadian government passed the first of a series of laws requiring Chinese immigrants to pay an entry fee, or "head tax." The Head Tax forced newcomers to pay exorbitant entry fees ($500 in 1903, the price of two houses at the time).

As of 1923, Canada decided to completely close the door to Chinese immigration. Both laws and racism contributed largely to the creation of a secluded society of single Chinese men. It was not until 1947 that the government allowed this population to enter the country again and let families be reunited. In 2006, those who were still alive from this time period, or their surviving wives, were granted partial redress as well as receiving an official apology from the federal government for past discriminatory measures aimed directly at them.

Incidentally, language and religious barriers were additional issues in Quebec. Prior to Bill 101, a great number of Allophones including the Chinese were attending English-speaking schools.

This chapter of history stretched over half a century and was marked by important challenges which paved the way for the integration of future generations of migrants.

Another wave of Chinese immigrants, with very different roots from the first wave, landed in Quebec from Indochina in the late 1970s into the early 1980s, benefiting from special refugee programs put in place by the Canadian government. This time period coincided with the fallout from the Vietnam War, which resulted in the arrival of “boat people” and refugees from Vietnam, Cambodia and Laos; amongst them a significant number with Chinese origins.

An interesting fact about these immigrants is that many had the ability to converse in French as they were part of former “French Indochina” colonies. Once integrated in their adoptive country, they joined the larger Chinese community, but would later form their own cultural organizations such as the Sino-Vietnamese association and the Sino-Cambodian association, as they had their own history and culture that differed from the Chinese immigrants. In terms of languages, despite widely speaking Vietnamese, Cambodian or Lao, they could also converse in Cantonese and/or Mandarin.

The 1980s and 1990s saw a massive immigration movement from wealthy and well-educated Hong Kong people because of the uncertain climate in China in the aftermath of Tiananmen Square and the return of Hong Kong to China in 1997. In addition, the mid-80s saw the Canadian government introduce the “Business Immigration Program” which prompted the immigration of entrepreneurs from this former British colony.

Immigration reached its peak in 1994 and then started declining as the economic crisis deepened in 1995. This influx of immigrants was bilingual in both English and Chinese and came from a lineage different from the previous two waves of immigration, although many could find their roots in southern Guangdong. They introduced a more flamboyant and sophisticated culture, were business-oriented and contributed greatly to the establishment of Cantonese-speaking schools in Quebec. 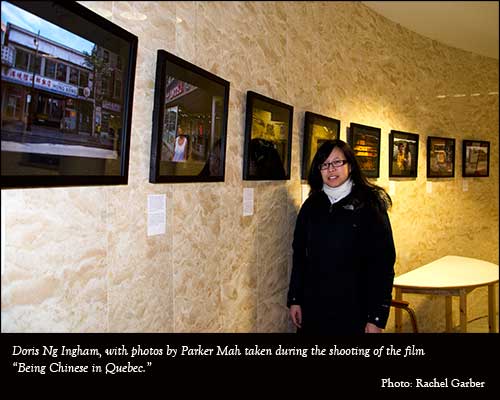 Currently, the newest wave of immigrants is from mainland Mandarin-speaking China. In 1989, the government of Canada allowed students to immigrate and in the 1990s, immigration expanded because of Canada’s greater emphasis on admitting economic or “business category” immigrants from China’s growing middle class who had increased capital and financial assets. Since then, there has been a profound shift in the “Chinese-Quebecer” landscape. These newcomers seem to ignore past Chinese-Canadian history and the struggles faced by their predecessors.

Subsequently, many Chinese communities, as they do not represent one unified community, coexist, but do not mingle as a result of the discrepancies in culture, language and history.

This is well illustrated in the documentary “Being Chinese in Québec: A Road Movie,” directed by Malcolm Guy and William Ging Wee Dere. The film discusses the issues of the Canadian immigration policies as well as the origins of the Chinese population in the province and the search for identity from the younger generation. The first Chinese-Canadian settlers experienced very different challenges from following generations.

Similar to a Chinese dragon, the Sino-Quebecker communities persevered and were resilient when confronted with demanding and difficult times.

Author
Doris Ng Ingham is a freelancer. She holds a B.Soc.Sc. joint honours in history and political science from the University of Ottawa. She also studied journalism at the Université de Montréal. She recently worked as a researcher on two feature-length documentaries: “Being Chinese in Quebec: A Road Movie” on the significance of Sino-Quebec identity, where she researched the history of Chinese-Quebecers and located this population throughout the province; and “My Ancestors’ House” a film on Chinese-Canadian self-identity and the practice of ancestral worshipping, where she looked into the history and traditions of the first wave of Chinese immigrants in Canada. Her professional career includes experience as a print and broadcast journalist, communication consultant, blogger and online community manager.

I am a Chinese Dragon. I hiss and snort through moon gates in Montreal’s Chinatown for the New Year’s festivities. I am a symbol of perseverance and strength – something my people needed when they came to Quebec; something that has sustained them in difficult times.

In February 2013, Productions Multi-Monde launched the film “Being Chinese in Quebec: A Road Movie,” which follows two young Chinese-Quebecers as they travelled the province searching for an answer to the identity of Chinese-Quebecers. The film shared the dark history of Sino-Quebec history (which included the infamous Head Tax and the Exclusion Act) and the fact that there was not one unified Chinese community, but many Chinese communities searching for their own identity, each rich with its own history and culture.