Above the marble circulation desk at the Atwater Library and Computer Centre in Westmount is a handsome marble clock that was donated to the library in 1920 by the jeweller Richard Helmsley, at a time when the library was known as the Mechanics’ Institute of Montreal. Just below the clock is the inscription:

The object of this Institute is to afford instruction and knowledge in the Arts, Sciences and Industries.

By the time the words were carved in marble, the Institute had been operating within those broad guidelines for more than 90 years. At the organizing meeting held in Montreal in November 1828, the Rev. Henry Esson had proposed that the goal of the new Institute would be “to instruct the members in the principles of the Arts and in the various branches of Science and useful knowledge.” In practice, its main objectives were to provide a library and meeting place for craftsmen and tradesmen (then known as mechanics), and to provide an evening school for apprentices and young adult immigrants.

Now, 185 years later, and renamed the Atwater Library and Computer Centre (ALCC), the organization still remains surprisingly faithful to those 1828 guiding principles. ALCC is independent and not part of a public library system, which has disadvantages but allows it to maintain or shift focus as deemed appropriate.

When the Mechanics’ Institute was started in 1828, the Industrial Revolution was already underway on the British Isles, and the apprenticeship system was breaking down. A result in Montreal was the influx of untrained young immigrants from England, Scotland and Ireland. There were no schools in Montreal for apprentices or young adults to learn the skills needed to enter the emerging industries; nowhere for them to learn arithmetic, geometry, spelling, French, as well as architectural and mechanical drawing. There were, however, lots of taverns, and community leaders were looking for ways to keep the young men away from the ale.

Into this mix stepped the Rev. Henry Esson, a Presbyterian who had arrived from Scotland in 1817 and was the minister at the St. Gabriel Street Church. A leader and a thinker, the Rev. Esson held a meeting on November 21, 1828, to frame an organization based on the London Mechanics’ Institute: a library and meeting place for members, and evening instruction for young adults, all in a setting free of religious and political affiliations. It would become the first organization in Canada to offer evening classes to adults.

At a December meeting just 18 days after the initial meeting, the constitution for the new organization was adopted. The founding officers of the Montreal Mechanics’ Institution (MMI) were leading citizens whose role was to provide preliminary funding and direction. President was the Swiss-born sheriff of Montreal, Louis Gugy. Vice-presidents were Canadian-born lawyer and politician Louis-Joseph Papineau; American-born merchant Horatio Gates; English-born industrialist John Molson; and the Rev. Esson.

Representative of those early members are names still well known; some joined at the beginning, some a few years later: carpenter Edward Maxwell, whose grandsons became among Canada’s most prominent architects; mason and builder William Hutchison, whose sons designed or built many of Montreal’s most memorable buildings; brash young lawyer Aaron Philip Hart; English engraver William Leney, who had retired on a Longue Pointe farm; architect John Ostell whose buildings changed the face of Montreal beginning in the late 1830s; Moses Judah Hayes, engineer, whose houses on Cote St. Antoine still exist; George Garth and later his son Charles Garth, whose plumbing, heating and ventilating company put in the furnace at the 1850s Montreal court house; and John Lovell, who started a printing and publishing business that is now the oldest family-owned enterprise in Canada.

The 1828 organization had limited success in forming an evening school, in part because of the difficulties in finding suitable teachers that the MMI could afford with the its low membership fee structure. However, weekly discussions among members, called “conversations,” seem to have provided a valuable interchange of ideas on diverse subjects including “The Causes and Cures of Cahots” (i.e. potholes); an improvement in the construction of steam-engine valves; “Prison Discipline” and “Principles of Architecture.”

There was a hiatus in activity from 1835 to 1840, during the political uprisings. A new Mechanics’ Institute of Montreal (MIM) was formed in 1840, amalgamating with the previous organization. Leading the revitalized group was John Redpath who, as a contractor and future industrialist, was aware of the need for workers educated in the requirements of the building and industrial trades.

In the early 1840s the school for apprentices and children of members began to achieve success, particularly in the fields of landscape, ornamental and architectural drawing. Among the teachers at various times were artist James Duncan, stained glass window maker John C. Spence, and architect Alexander Cowper Hutchison—who earlier as an apprentice had learned his trade at the Mechanics’ Institute.

In the early 1850s, during the presidency of builder and art collector Henry Bulmer, the Mechanics’ Hall was built on St. James Street, near Molson’s Bank. A permanent home made year-over-year planning easier than in rented quarters. With its large meeting hall, the Mechanics Hall became a 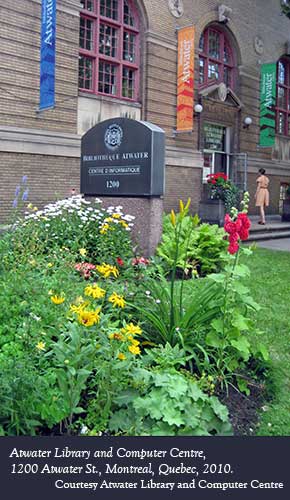 cultural hub of the city. By the end of the 1850s, the library of the Institute had become one of its most important features. The 1859 annual report notes, “The library and reading room form the chief attractions of the Institute, and the manner in which these departments are supplied and managed will always have great influence on the membership list.”

By 1910, the population of the city was beginning to move from the downtown core, and the decision was taken to sell the Mechanics’ Hall and erect a purpose-built library at the easternmost corner of Westmount. Land was purchased from the Masson estate, and the new library was built during the long presidency of lumberman William Rutherford, whose family has served the library for generations.

Currently, ALCC offers a low-cost membership that provides access to mainly English-language general-interest books and e-books. It offers a free weekly lunchtime lecture series to the public on a wide variety of subjects; it sponsors free evening poetry readings and a book club. The 100-seat auditorium is rented hourly to community organizations. Its original science and industry-based courses have shifted to provide basic and advanced hourly computer access to the public, as well as computer courses for populations ranging from at-risk youth to senior citizens.

Author
Susan McGuire grew up in the Eastern Townships, attended Bishop’s University, and lives in Montreal. She is the historian for the Atwater Library and Computer Centre.

I am the marble circulation desk at the Atwater Library and Computer Centre. I have been welcoming visitors at the main entrance ever since 1920. I was a proud showpiece in my brand-new, purpose-built library building! I was called the “delivery desk” then, and the library was called the Mechanics’ Institute of Montreal.

The Atwater Library and Computer traces its origins back to 1828, when the Montreal Mechanics’ Institution was formed under the aegis of the Rev. Henry Esson. Its major objectives were to establish a library and meeting place for craftsmen and tradesmen (then known as mechanics) and to establish an evening school for apprentices and young adult immigrants. It operated out of rented quarters in old Montreal until the mid-1850s when the Mechanics’ Hall was built. It moved to eastern Westmount in 1920. Currently, there is a modest membership fee, but many events are free and open to the public.