In the autumn of 1940, Leon (Lejbus) Borczuk, his wife Anna (Channa) Blimbaum, and their one-year-old daughter Thea were herded into the Warsaw Ghetto along with hundreds of thousands of other Polish Jews. 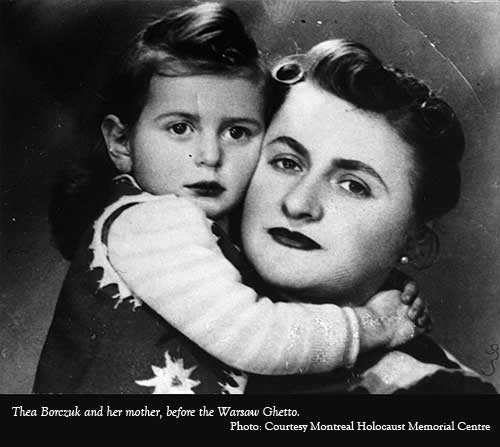 Prior to the outbreak of war, Leon had worked as a shoe factory foreman and Anna as a bookkeeper, but in the Ghetto they took whatever work they could get. Life in the Ghetto was fraught with hardship, not the least of which was the constant threat of sudden assault, execution, or deportation to even worse places. People disappeared without warning, leaving everything behind. On one occasion, Leon came across an abandoned doll, which he gave to his daughter. The doll became Thea’s treasured companion and chief source of comfort over the following brutal years.

Towards the end of 1942, Ghetto residents began to plan a revolt against the Nazis. Leon was determined to fight, but made arrangements for his wife and daughter to escape. One day, Anna did not return from work detail. The next day, a friend brought Thea (and her doll) to work and showed her the same secret route into hiding, where the three-year-old was eventually reunited with her mother. A few days later, the Warsaw Ghetto uprising began, ending three months later with the death or deportation of the resisters.

While such events were unfolding across Europe, Canada’s Jews were frantic. As rumours of atrocities spread, organizations such as the Canadian Jewish Congress (CJC) struggled to impress the plight of uprooted Jews upon a federal government more concerned with fighting a war than with saving its victims. In fact, the time for effective action had already passed: since the rise of Nazism, the CJC and other groups had pressed the government to allow Jewish refugees into Canada, but without success. Canada was closed to all but a handful of immigrants, and a policy existed throughout Canadian government agencies, both at home and abroad, to keep out Jews, who were seen as undesirable and inassimilable.

Even the forceful Samuel Bronfman, the wealthy Montreal distiller who became president of the CJC in 1939, and his equally forceful executive director, Saul Hayes, were unable to make more than slight shifts in this policy before the war began. In Montreal, where the head office was located, the CJC also faced steadfast opposition from Quebec politicians of various stripes who feared floods of immigrants. The Union Nationale’s Maurice Duplessis, leader of the opposition throughout most of the war, garnered votes by claiming the federal government was on the verge of allowing thousands of Jewish refugees into Quebec. This could not have been further from the truth, although Ottawa did take note of what they assumed was widespread antipathy to immigration reform in Quebec and a potential source of lost votes were they to accede to the CJC’s pleas.

Perhaps even more shamefully, the federal Liberals did not open Canada’s doors to refugees even after returning to power at the end of the war, despite the news from Europe that went beyond the worst fears anyone had had regarding the plight of Jews. Allied forces liberated death camps – including Treblinka, to which the remnants of the Warsaw Ghetto had been sent – but were obliged, given the logistics of Europe’s decimated infrastructure, to house Holocaust survivors in refugee camps. Like others whom the war left homeless, Jews became “displaced persons” (DPs) in need of resettlement somewhere. Hananiah Meir Caiserman of the CJC visited Poland in 1946 and was shattered by what he saw. He returned determined to shift Canada’s policy.

This proved hard going. Mindful of a possible post-war depression and convinced that Jews made poor immigrants, officials spoke warmly of Northern European Protestants as suitable candidates for admission to Canada, and of Jews as anything but. The CJC and other Jewish groups were obliged to promote special programs to recruit Jewish DPs in fields such as tailoring, in which it was “known” that Jews had great skills, even if the stated shortage of tailors had to be exaggerated to reassure officials. Even so, the government insisted that 50% of tailors recruited from the camps be non-Jews, a condition that proved difficult to meet and almost jeopardized the program. Many Canadians were willing enough to take in orphans, although even Jewish families often balked at the prospect of welcoming teenagers. The sad truth was that very few young children had survived the Holocaust. Having seen the misery first-hand, Caiserman was willing to adopt a teenager, one who had been orphaned at Auschwitz; Nella grew up as a sister to Montreal artist Ghitta Caiserman-Roth and, like most Holocaust survivors who settled in Montreal, pursued a career and raised a family despite great psychological scars.

Canada’s immigration policy did not change until early 1947, when after a decade and a half of fearfully barring immigrants (often inadvertently sentencing them to eventual death), the federal government decided that the country would benefit from new sources of labour. Official attitudes towards Jews persisted, however: of the 180,000 immigrants admitted to Canada by the summer of 1948, only 8,000 were Jews, most of them the beneficiaries of the special recruitment programs championed by Hayes and others. Eventually, after having waited years in DP camps, Jews began to arrive on Canada’s shores in greater numbers.

Nearly half of them settled in Montreal, which was still home to Canada’s largest Jewish community and had the most developed social and educational networks. In time, Montreal would have the distinction of being the city with the third largest Holocaust survivor population in the world, surpassed only by New York and Tel Aviv. Adapting was not made easier by ongoing discrimination – into the 1950s, Jews were barred from many clubs and resorts, and faced a quota at McGill University – but the successful integration of these individuals speaks to a high degree of sympathy and nurturing on their hosts’ part.

One of these arrivals was Thea Borczuk. She and her mother had survived the war, keeping a low profile in Lublin, disguised as Poles. After liberation, Anna and Thea heard word that Leon, too, had survived; although packed onto a train for Treblinka along with Thea’s grandparents, he had managed to jump off and stayed hidden in the forest until the Germans retreated. The family was reunited in Warsaw, made their way to France, and in 1950 boarded a ship to begin a new life in Montreal.

At no point in her saga did Thea let go of her doll.

Sources
Irving Abella and Harold Troper, None Is Too Many: Canada and the Jews of Europe, 1933-1948, Toronto, 1983.
Joe King, From the Ghetto to the Main: The Story of the Jews of Montreal, Montreal, 2003.
Montreal Holocaust Memorial Centre, Thea Borczuk-Slawner file.

this is wonderful . It is amazing to see the old dolls. Looks a little creepy (thank you to the Horror Hollywood movies for making such an impression about these kind of dalls). really nice to read the story of tht doll too.

Doll from the Warsaw Ghetto

I am the doll found by Leon Borczuk, abandoned in the Warsaw Ghetto. I do not recall my former life; I think it was quite happy and then very sad. Part of my nose is missing. I don’t remember how that happened. But I took up with Leon’s daughter Thea and never left her side, even after we escaped the Ghetto and lay in hiding in Lublin. Of course she brought me with her to Montreal. Eventually Thea grew too old to spend time with dolls, but she let her children play with me. They took good care of me, too, although I rather wish they hadn’t used red nail polish to paint my nails and lips. Thea kept me until 2000, when she donated me to the Montreal Holocaust Memorial Centre, where I can tell my story to everyone who visits.

In the 1930s and 40s, Quebec’s Jewish population was deeply concerned about the plight of their distant family members and other Jews living under Nazi rule in Europe, but it seemed there was little they could do. At the Canadian Jewish Congress’s head office in Montreal, community leaders such as Hananiah Caiserman, Samuel Bronfman, and Saul Hayes worked to change the federal government’s prejudice-ridden policy that severely limited immigration and all but excluded Jews, on the grounds of their supposed un-assimilability. They also battled overt anti-semitism in Quebec. In time, however, the law changed and doors opened. Jewish refugees such as Thea Borczuk were able to settle in Montreal and make their contributions to Quebec society.