Published on Jun 3, 2013
This video features a unique historical building that straddles the border between Derby Line, Vermont, USA, and Stanstead, Quebec, Canada. The film shows the building's ornate drop curtain of 1904 painted by Irwin LaMoss, century-old graffiti in the dressing rooms, and the library's reading room intersected by the "Line" marking the border between the countries. Interviews with Matthew Farfan, Vice-president, and Nancy Rummery, Librarian. The drop curtain is Object No. 44 in the English-speaking Quebec in 100 Objects, a project of the Quebec Anglophone Heritage Association (QAHN) in Quebec, Canada. Visit 100objects.qahn.org to see the story of this object, and photos and stories of 99 other fascinating objects that together form a portrait of the English-speaking minority in Quebec.

For over a century, this famous drop curtain has graced the stage of the Haskell Free Library and Opera House, which was built astride the Canada-U.S. border in Stanstead, Quebec, and Derby Line, Vermont, between 1901 and 1904. 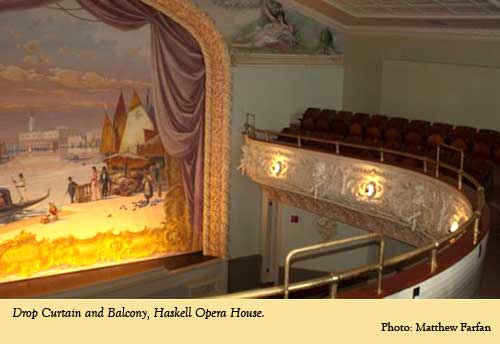 Featuring a splendid, romanticized painting of the harbour of Venice, the curtain is a fine example of turn-of-the-century theatre décor. Painted on Russian linen, and measuring 7.6-metres x 8.5-metres, it is raised and lowered on special occasions, such as on opening and closing nights every concert season. The curtain, along with the backdrop, sets, and other elements of stage scenery and equipment, are believed to be the only surviving examples of the work of the celebrated Vermont-born, Boston theatre artist, Erwin LaMoss (1854-1910). Together, they constitute one of the most complete sets of their kind in North America.

The curtain, sets and stage equipment were created in Boston and transported by train to the border community. Their installation on the stage, which is located on the Canadian side of the Haskell Opera House, took place on May 16, 1904. The event was witnessed by a crowd of onlookers, including the editor of the Stanstead Journal, who reported that “while all expected to see something good none realized the excellence of the scenery and stage equipment until they had seen it.”

Created in the United States for an international facility that is itself a symbol of the amity that exists between two countries, the Haskell’s magnificent curtain is truly one of the treasures of the cross-border community that is Stanstead, Quebec, and Derby Line, Vermont. 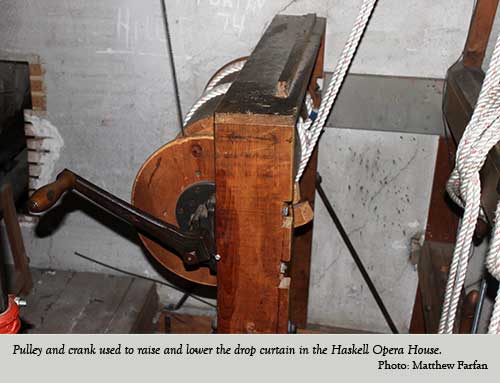 The pride of Stanstead, Quebec, and Derby Line, Vermont, the Haskell Free Library and Opera House was constructed deliberately on the boundary line separating Canada from the United States. This remarkable institution has attracted attention from around the world, and has been classified as a historic site by the governments of Canada, the United States and Quebec.

The Haskell Free Library and Opera House was conceived and financed by Martha Haskell, together with her son, Colonel Horace Stewart Haskell, whose wish was to provide the border communities with a centre for learning, cultural enrichment and popular entertainment.

Eastern Townships native Martha Stewart Haskell (1831-1906) was the daughter of American-born parents. She married an American with business interests on the Canadian side of the border. In later life, she lived in Derby Line, Vermont, within sight of the Canadian border. A citizen of the two communities - and the two countries - Martha Haskell envisaged a library and opera house built in her community in such a way as to serve people living on both sides of the line, without their having to pass through customs. This was the genesis of the world’s only international library and opera house. According to a document on the wall of the library, Martha Haskell’s vision was “ample proof of her public spirit and large-hearted generosity.”

Businessman Col. Horace Haskell (1860-1940) oversaw every aspect of the planning, construction, furnishing, management, and, ultimately, the endowment of the institution that bears his family’s name. When Martha Haskell died in 1906, it was Col. Haskell who ensured that the institution would be able to support itself for years to come. After securing a charter in Vermont in 1908 for the library and opera house that he and his mother had founded, Col. Haskell served for years as president of the organization’s board of trustees.

Designed by Stanstead architect James Ball and Gilbert Smith of Boston, and constructed by Nathan Beach, a contractor from Georgeville, the Haskell combines elements of the Queen Anne, Georgian and classical revival styles. Following three years of construction, the opera house opened in 1904, the library the following year. 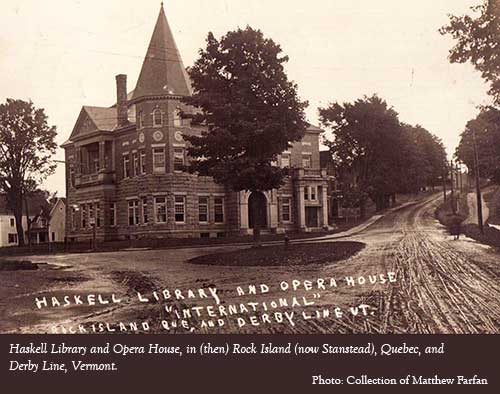 The Haskell is a curiosity. Nowhere else in the world can one sit in a theatre that is traversed by an international border, and where most of the audience sits in the U.S. to watch a show on a stage in Canada. Nowhere else can one find such an unusual library. The front door is in the U.S., the circulation desk and all of the books are in Canada, and the reading room is international.

The Haskell is notable for the quality of its building materials – local granite on the exterior, and native woods, stained glass, mosaics and tin ceilings on the interior. The atmosphere in the library is luxurious yet restive. There are fireplaces, sofas and artwork. This contrasts with the festive mood in the opera house upstairs, with its proscenium arch, plaster cherubs, murals, and picturesque stage scenery, including, of course, the famous drop curtain by Erwin LaMoss.

The acoustics in the opera house have delighted audiences and performers alike since LaMoss’s curtain was raised for the very first time on opening night on June 7, 1904. Over the past century, the Haskell has hosted an array of performing artists and public speakers. Luminaries such as Arctic explorer Vilhjalmur Stefansson have lectured within its walls. E. Pauline Johnson (Tekahionwake) recited her poetry here. In the early years of the 20th century, minstrel shows and vaudeville were popular. Jazz, blues, folk, bluegrass, rock, classical music, dance, and adult and children’s theatre have all taken centre stage. Generations of performers from both sides of the border have left their signatures on the dressing room walls; these have been carefully preserved to this day.

Today, the Haskell Free Library and Opera House is both an important local institution and a major tourist attraction. A cultural gem, it is a symbol of friendship between two countries – something unique, something to be treasured.

Author
Matthew Farfan is the Vice President of the Haskell Free Library and Opera House. He is also the Executive Director of the Quebec Anglophone Heritage Network (QAHN).

I am the painted drop curtain in the Haskell Opera House. I am beautiful and painterly and graceful. I am part of the cast for every performance and always ready for opening nights. I am proud to be a duel citizen – born in the United States, and living more than a century on the Haskell stage, in Canada.

The painted drop curtain of the Haskell Opera House in Stanstead, Quebec, is a marvellous work of art and theatre décor, and a splendid example of theatrical ingenuity from the early 20th century. Featuring a romanticized Venetian scene, the curtain was created by Vermont-born, Boston theatre artist, Erwin LaMoss (1854-1910). Located in a 400-seat theatre which has the distinction of being located partly in Canada and partly in the United States, the curtain, like the Haskell itself, symbolizes international friendship and the historic closeness between the Eastern Townships’ English-speaking population and the Americans just across the border.