With the disappearance of and increased pressure on many wetlands in southern Quebec, the Brome Lake Land Foundation has accomplished something quite extraordinary. A committed group of local citizens has managed to acquire, preserve and protect close to 500 acres of ecologically sensitive wetlands and woodlands surrounding Brome Lake in the Eastern Townships.

It all started in the spring of 1987 when four residents of the Town of Brome Lake decided to purchase 118 acres of marshland bordering Brome Lake. Their objective was to preserve the natural habitats, protect the quality of the lake and have the property serve as a wildlife sanctuary. The site continues to serve as home to a host of bird life which includes blue herons, wood ducks and osprey; aquatic animals such as otter, beaver, muskrat and snapping turtles; wildlife such as fox and deer and numerous types of plants and wild flowers. 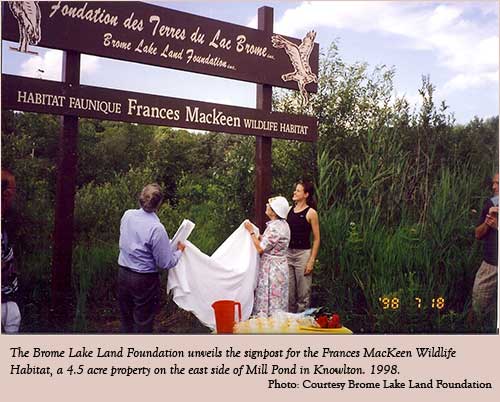 The acquisition of the properties helps ensure the protection of diverse habitats and ecosystems for plants, waterfowl and wildlife and further contributes to the water quality of Brome Lake.
“At the start we had 40 members,” said Peter Wade, one of the founding members of the foundation. “This grew to 95 in 2002 and currently rests at 84 in 2013. We hope to keep it at that level or increase it as we become better known.”

“Property is added to our holdings by means of direct purchase or as a gift,” Wade continued. “To purchase land we must raise the necessary funds from donations. Since 1987, residents have contributed over $250,000 in funds and land to the foundation.” Recently, the Quebec government has accorded the foundation with ‘Nature Reserve’ status for all properties under its stewardship, which means the properties are protected in perpetuity from development. This allows the foundation some relief from property and school taxes. 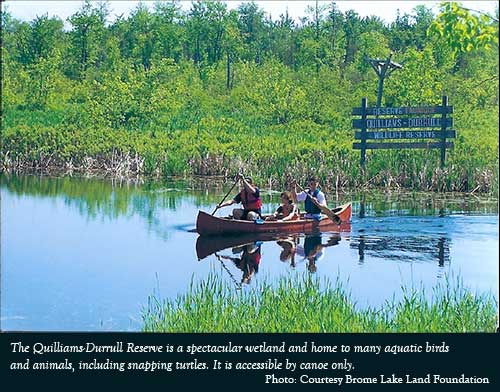 The foundation was one of the first local citizen organizations in Quebec formed ‘to acquire land’ to protect the environment. It also has a Canadian charter and is recognized as a charitable institution under Canadian and Quebec laws.

In addition to preserving lands with unusual, exceptional or exemplary natural habitats, some members of the foundation have directly, or indirectly, helped in the development of the town’s network of scenic walking trails, which includes access to the Fisher Woods trail, the construction of the Coldbrook walking path and the path from Douglass Beach to Trestle Cove, in Knowlton.

“Without the work of the foundation's board members, the Coldbrook path would not have been built,” said Wade, adding “our members contributed much of the volunteer work required to construct the path and build the bridges.”

The foundation has also provided financial support to biologists working with Brome Lake’s two primary schools – Knowlton Academy and École Saint-Édouard – introducing students to the value of conservation efforts and the biology of plants and animals in wetlands. The foundation celebrated its 25th anniversary at a gathering held at Fisher Woods Wildlife Reserve in August 2012.

The Brome Lake Land Foundation follows in the footsteps of other grassroots associations and groups which have played a significant role in promoting conservation in Quebec. In 1827 the Montreal Natural History Society was established and its journal, the Callodiall Naluralisl and Geologisl, encouraged readers to protect wildlife populations. The first humane society in Canada was the Canadian SPCA in Montreal, established in 1869. It promoted the humanitarian treatment of wild and domestic animals and helped to improve the public's awareness and appreciation of nature.

At the end of the nineteenth century, the government of Quebec decided to set aside large tracts of land as natural parks, and between 1894 and 1937 two provincial parks were opened - le parc du Mont-Tremblant and le parc des Laurentides. During the 20th century, even more conservation associations were created. One of the oldest non-profit conservation groups is the Quebec Society for the Protection of Birds, established in 1917.

Throughout the 1970s and into the 1980s, environmentalism in Quebec promoted sustainable life-styles and ecological alternatives. Back-to-the-land movements and community gardens and a vast network of natural food cooperatives became more popular. Indeed, organic agriculture in Quebec could not keep up with the demand for organically-grown food. Within this environmental movement, small grassroots natural heritage landscape organizations like the Brome Lake Land Foundation formed across the province to protect local green-spaces and regions threatened by developers and pollution.

To Learn More
Appalachian Corridor Appalachien, a non-profit conservation organization whose mission is to protect natural areas in the Appalachian region. Its team of biologists and legal experts provide technical assistance, advice and expertise to local conservation organizations and landowners who want to protect nature in their areas. Contact info [at] apcor.ca or 450-242-1125. www.apcor.ca
Quebec Society of Wetland Conservation, http://www.scmhq.ca/ehome.htm
Quebec Water Policy, http://www.mddefp.gouv.qc.ca/eau/politique/index-en.htm

Author
Frank Nixon is a freelance writer based in Montreal and Knowlton, Quebec. He is a graduate of McGill University with a BA in English and from Concordia University with a Certificate in Journalism. He has contributed hundreds of articles for a variety of publications. His speciality is investigative journalism.

I am the wooden sign that marks the entrance to the Fisher Woods. I proudly proclaim the new status of Fisher Woods as a nature reserve. The Brome Lake Land Foundation ensures that wetlands and wooded acreage like the Fisher Land Reserve is protected from development. My sign is bold because I am taking a stand on this ground. I'm not going anywhere and neither is the land I guard.

In 1987 four residents of the Town of Brome Lake purchased 118 acres of marshland bordering Brome Lake. Their objective was to preserve the natural habitats, protect the quality of the lake and have the property serve as a wildlife sanctuary. Today there are nine environmental preserves around Brome Lake protected by the Brome Lake Land Foundation.