The Fokker D.VII - Terror of the Western Skies

The Fokker D.VII was a World War I German airplane designed by Rienhold Platz of the Fokker-Flugzeuwerke. Arriving too late to change the course of the war for the German forces, the Fokker DVII was still considered to be the finest aircraft produced during that time period.

Early in 1918, the German government held a competition with their front line fighter pilots to test a number of aircraft designs. The D.VII was tested by the famous Baron Manfred von Richtofen also known as “The Red Baron,” who found the plane to be unsteady and unpredictable. Based on his recommendations, Platz redesigned the rear fuselage and made other structural improvements. Once the modifications were made, the D.VII was ordered into production. 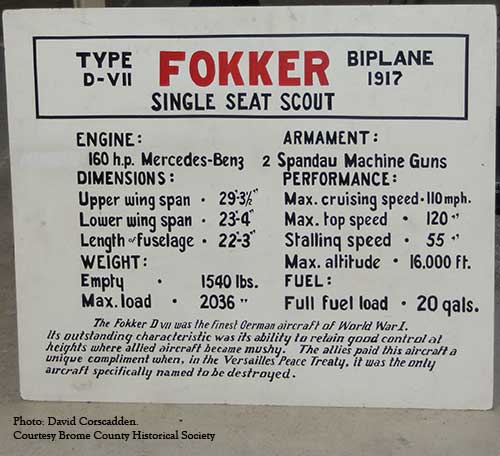 It was known for its manoeuvrability and its ability to climb quickly at high angles of attack. This advantage allowed the D.VII to build up speed and energy during a dive attack and gave them the ability to choose targets at a high altitude. Fokker technology first allowed machine guns to be synchronized through the front propeller of the airplane.

Fokker was unable to produce the aircraft fast enough so the contract was also given to the Albatros-Werke and the Allgemeine Elektricitats-Gesellschaft companies. By August 1918, the Fokker D.VII had destroyed 565 Allied aircraft – making it one of the most feared airplanes of the war. When the war ended in November 1918, there were 775 Fokker aircraft in service.

Following the war, the terms of the Armistice asserted that the Germans surrender all weapons and munitions including the remaining examples of the D.VII. On November 27, 1918, just 16 days after the signing of the Armistice that ended the war, Senator George G. Foster of Knowlton sent a written request for unspecified “war trophies” to Dominion Archivist Col. A.G. Doughty. A month-long correspondence between the two men followed, and an agreement was made; the Brome County Historical Society would be the recipient of a Fokker D.VII plane if a building suitable for its display and safe keeping could be erected.

Senator Foster wasted no time in contacting an old Knowlton schoolmate, Zelotes E. Martin of Chicago, who readily agreed to pay for the building. It was commenced immediately and completed in the summer of 1921, at which time the promised plane was shipped, in pieces, from Ontario’s Camp Borden. The shipping cost was $125 and there was some delay in procuring someone qualified to assemble it. Records indicate that the plane sent to Knowlton was one of 22 planes acquired by Canada as souvenirs of the war. McGill University, Acadia University and other educational institutions received the planes as gifts. The biplanes were promptly taken apart and studied. 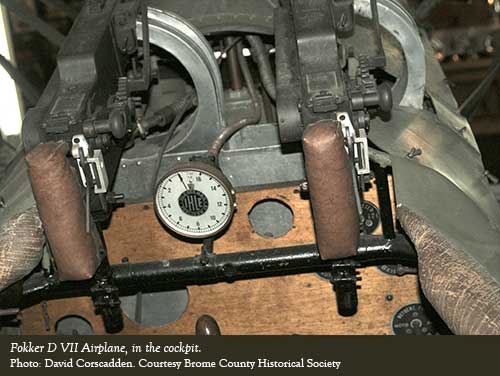 The “Martin Annex” was officially opened just slightly behind schedule on August 26, 1921, by the Right Honourable Sir Robert Borden, Canada‘s wartime Prime Minister. Vastly unpopular in French-speaking Quebec for enacting conscription during that conflict, he was warmly regarded in the Eastern Townships where soldiers traditionally volunteered for duty. In a brief speech before 125 excited guests, Borden praised the spirit of Canadians and challenged them, in the name of their fallen, to continue to hold high the ideals of democracy and peace in their “great and autonomous nation within the Empire.” He then unveiled a plaque dedicated to seven local men from Knowlton, Brome, Sutton, and Mansonville who served as aviators during the war; one of these was George Buchanan Foster, Senator Foster’s son. An eighth pilot, Zelotes Martin’s son Wells Martin, who served in an American flying corps, was also included. Both of them survived the war.

Thousands of visitors have passed through Brome County’s museum and marvelled at the Fokker D.VII and the other “war trophies” on display. Many have been thrilled by the exhibit, recalling or imagining the heroics of daring young airmen like “Slippery” Bill Barker and Billy Bishop, Canada’s most decorated pilots of the First World War, and of course the legendary “Red Baron.” For others, the airplane is a moving and sad reminder of the courageous “boys from Brome” and elsewhere who did not return from the Great War.

The Fokker D.VII biplane has been on display at the Brome County Historical Society Museum in Knowlton, Quebec since 1921.The only of the fleet to have survived in Canada, it is the only one of three left in the world that is still held together by its original fabric skin.

Author
Joanne Croghan Marier is a member of the Brome County Historical Society.

I lived in Knowlton until I went to university and remember the aircraft very well. I recall being told sometime after I moved away that it had been restored as a Centennial Project by an RCAF Squadron in St. Hubert? This was not mentioned in the article. Arlene Royea wrote for Our Canada magazine so I assume this was not the case but would appreciate you confirming this.
Thanks. Great article on something I remember clearly.

All the German WW1 planes and their brightly colored branding by their fighter pilots has always been a big inspiration for me and theming my own planes. To see a real original 1918 DVII that escaped the Armistice destruction would be a real treat.... http://air-war.org

I am the Fokker D.VII airplane that flew the skies in the Great War. When I was brought to Canada, I represented different things to many people. I was a symbol of tyranny and destruction. I was a trophy of war. I was a sign of Allied victory. I was a symbol of remembrance for those who sacrificed their lives for a cause greater than they could understand. I am enshrined in the Brome County Museum as a war memorial and a tribute to the local boys who went to war. To the victor belong the spoils.

The German-made biplane known as the Fokker D.VII was arguably the finest aircraft produced during World War I. In 1918, the plane was tested by German flying aces, including the legendary Red Baron, prior to its mass production. After the Armistice was signed in November 1918, Canada claimed 22 Fokker airplanes as trophies of war and for research and display. The English-speaking community in Knowlton, Quebec built a special annex specifically to house a Fokker plane. The Fokker was acquired to honour Canadian soldiers who fought in the Great War. In excellent condition, the Fokker D.VII remains a focal point for much discussion and contemplation.