The Gravestone of Donald Morrison, the Megantic Outlaw

At rest in the Gisla Cemetery near Milan, Quebec, not far from Lake Megantic in the Eastern Townships, is the gravestone of Donald Morrison, popularly known as “The Outlaw of Megantic.” Much has been written about him, and much has been imagined. His exploits created the longest manhunt in Canadian history, and it ended in his conviction for manslaughter. His death in 1894, (not 1888 as engraved on his stone) was the sad end to what he felt was his quest for justice, and what others said was a just end for his crimes. His story is as much about the proud and tenacious Scottish immigrant community in the Eastern Townships of Quebec as it is of the adventures and misfortunes of one headstrong young man. 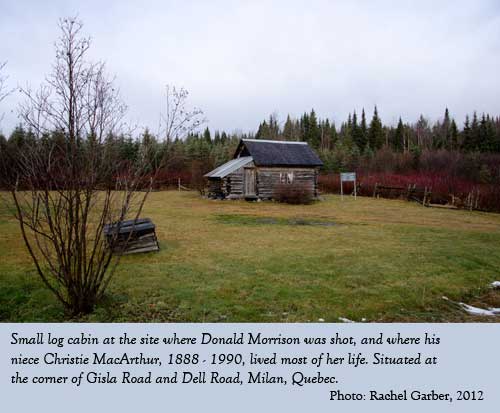 From the Isle of Lewis in the Outer Hebrides, the Morrisons and other Scottish families left the hardships and brutalities of life during the Highland Clearances to face the challenging life ahead of them in a wild and difficult land called the Eastern Townships of Quebec. The Highland clearances were the forced displacement of a significant number of people in the Scottish highlands during the 18th and 19th centuries by the aristocratic hereditary landowners who wished to clear the land for sheep farming. The crofters (tenant farmers) were forced to leave, clearing the way for a new economy.

Swept away also were the traditional clan organization and a secure economic base for the highlanders. Many immigrated to the North American colonies. Donald Morrison’s family were part of a group of families immigrating to a wild undeveloped area of the Eastern Townships west of Lake Megantic. They arrived with the clothes they wore and little else, save perhaps a beloved Bible. They cleared the land and built roads on what was poor and stony soil sold to them by the British American Land Company. Isolated from the surrounding communities by lack of transportation and by language, the Scots remained socially and culturally isolated. 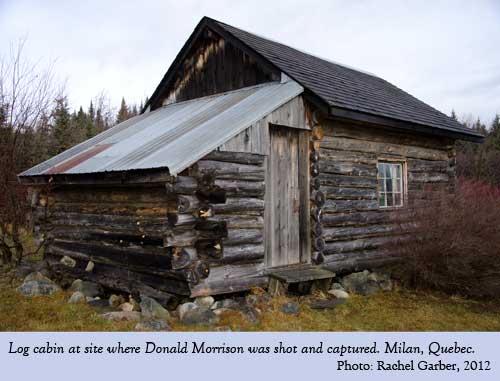 Murdo Morrison, father of Donald, found himself falling into greater and greater debt as he tried to keep control of his land. Donald, his youngest son, worked the grain harvest in western Canada and “cowboyed” in Texas to earn money to save the family’s land and help pay off the debt his father had accrued. Donald eventually returned home to discover a tangled web of mortgage financing that resulted in the loss of the family farm, and his own legal claim in it. The farm and its mortgage were transferred to Major Malcolm Macaulay, a wealthy and influential man in the region. No doubt already angered by his father’s mismanagement of the farm finances, Donald was enraged by the perceived injustice of Macaulay’s cheating his family out of the ownership of the farm. Morrison harassed the new owners, an unsuspecting French-speaking family, and was sought by the law.

One Lucius (Jack) Warren, a well-known American bootlegger and smuggler, was engaged by Macaulay as special constable to arrest him. In what was described as a “wild west shootout,” Morrison shot and killed Warren in the town of Megantic in June of 1888 in what he claimed was self-defence. Escaping and evading capture for months with the assistance of sympathetic Scottish farmers, Morrison was finally shot and captured in 1889 in Marsden, Quebec (now called Milan). His spirit broken by the perceived injustice that he had not been able to right, he fell ill in prison. Released after serving six years, Donald Morrison died within hours after gaining his freedom. 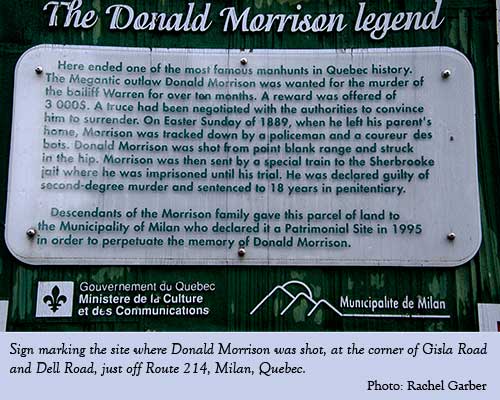 The heart of the story is really the support Donald Morrison sought and received from his community: the Scottish neighbours and kinsmen who sheltered him and misled the authorities on countless occasions. A popular story told is that once Donald had sought refuge in the home of a Gaelic-speaking woman. Donald hid under the bed when the authorities knocked at the door. Speaking in Gaelic, which they could not understand, she said, “Pull your feet in, Donald. They’re sticking out from under the bed!” The Megantic Outlaw escaped to freedom for another day.

Perhaps Donald Morrison is admired for being an individual “thumbing his nose” at authority, or perhaps for representing the clannish pride, endurance, and strength of the Scottish community in this part of Quebec. In either case his story is celebrated by a yearly festival in Gould, where a dwindling number of the Scottish immigrant community members continue to make their home. Today there are still families in the region with the names Morrison, Macaulay, MacDonald, MacIver and others, who carry on in the spirit of their Scottish ancestors.

Morrison’s gravestone rests in the Gisla Cemetery, near Milan, not far from the “wee” log cabin, a replica of the home of Donald Morrison’s niece Christie MacArthur, who lived there most of her life.

Author
Jacqueline Hyman is a writer and lives in the Eastern Townships. She is a member of the Board of Directors of the Eaton Corner Museum in Cookshire-Eaton, Quebec.

I am the gravestone that marks the final resting place of Donald Morrison. I guard the bones of a troubled soul who tried to seek justice from a legal system he thought would uphold his sense of righteousness. I measc na naomh go raibh sé - With the saints may he be.

Donald Morrison was the son of Scottish immigrants who settled in the Eastern Townships of Quebec. Donald tried in vain to maintain the family farm after his father was outwitted by a wealthy individual who took advantage of his illiteracy and lack of understanding of mortgage financing. An arrest warrant was issued for Donald Morrison following harassment of the new land owners and damage to the property. An American constable from the United States was gunned down in a shoot-out with Morrison, and the longest manhunt in Canadian history seized the public’s attention and imagination. After 18 months, Donald was captured and spent six years in jail. He died soon after his release in 1894.