The Quebec Federation of Home and School Associations

The Home and School movement was born in the wake of the First World War and the Spanish Flu epidemic, a time when Canadians were keenly aware of the need to improve public health. Parents and teachers in communities across Quebec organized to provide hot lunches and health inspections to school children, many of whom lacked basic necessities at home. The 1920s and 30s saw Home and School associations formed in schools in both the Montreal area and further afield: Hochelaga, Pointe Claire, Westmount, Montreal West, Chateauguay, Beauharnois, Hudson, McMasterville, Asbestos, Coaticook, Sutton, and Alma. 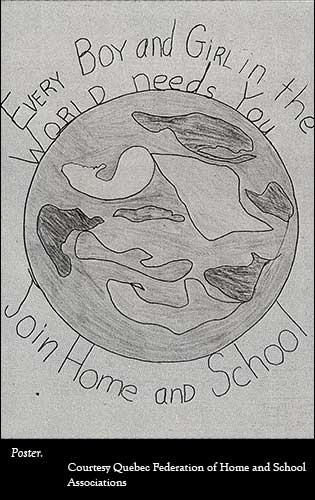 The onset of the Second World War led to a substantial increase in the number of associations, largely because of the growing concern for the problems of youth, such as mental health, juvenile delinquency, smoking, school safety, racism, and basic literacy. Parents, teachers, and others in the community found the local school to be a useful place to meet to discuss these issues, which also affected society as a whole; they saw the Home and School association as an appropriate vehicle for effecting change. These were diverse communities socially and economically, but the schools were all under the Protestant system; the active involvement of parents in local schools was a characteristic feature of Protestant education in Quebec, and for the most part, the Home and School movement operated in English.

Home and School associations understood that if they could speak authoritatively as one body they could draw the attention of the public and government to their concerns more effectively. A provincial federation began to take shape at a 1940 conference at Macdonald College, where Home and School delegates met with representatives of the Quebec Women’s Institutes, the Child Welfare Association of Montreal, the Provincial Association of Protestant Teachers, the Local Council of Women of Montreal, the McGill Department of Education, the Protestant Committee of the Council of Public Instruction, and the Mental Hygiene Institute. Subsequent meetings led to the founding of the Quebec Federation of Home and School Associations in 1944. In its early days, the QFHSA’s leadership was largely middle-class, well-educated, and for the most part urban; it was also predominantly male – unlike the leadership of most member associations, which tended to attract mothers and female teachers. Even so, much of the day-to-day work running the QFHSA was undertaken by women, who found opportunities to hone management skills that they would rarely have encountered elsewhere in the post-war world.

These men, and increasingly these women, were formidable advocates. The QFHSA quickly became involved in a range of health issues from dental clinics to fluoridation. It provided a catalogue of films on health to show at local association meetings, it published a guide on communicable diseases, and it recommended specific textbooks on health for high school students. Campaigns for awareness of mental illness and learning disabilities, traffic safety, vaccination, and curbing television violence all led to improvements in the lives of children and won praise for the QFHSA across the province and beyond. The organization disseminated information on these issues in its newspaper, the Quebec Home and School News, which began publication in December 1945 and is still being produced today.

Although constitutionally non-partisan, the QFHSA was prepared to engage on the political level. A defining moment came right at the beginning, when a Home and School association in Outremont sought the QFHSA’s help in its conflict with the local Protestant school board. Short of cash, the school board had decided in the spring of 1945 to close its doors to the many Jewish children already attending Outremont schools, on the grounds that their parents were not property owners and did not pay school taxes.

To the Protestant and Jewish members of Home and School, this decision seemed mean-spirited, especially given the horrific news of the Holocaust in Europe. The QFHSA formed a committee, headed by activist Muriel Duckworth, to review the education laws, examine the terms of the agreements between the board and the Jewish community, and assess public opinion. Duckworth’s report found the board’s actions morally and legally suspect, and called not only for the decision to be revoked but for the government to enact sweeping reforms to the education system to protect minority rights.

This last the Duplessis government had no interest in doing, but the Outremont school board, faced with mounting hostility from all segments of the population, including Protestant ministers and the Canadian Legion, did back down. Duckworth’s report on the “Outremont School Question” proved a kind of policy statement for the QFHSA regarding notions of citizenship, a policy that would characterize much of its later work on educational rights. With the long-awaited reforms to Canadian immigration in 1947, the QFHSA established programs to help integrate newcomers into English-speaking Quebec society and advocated non-confessional education for an increasingly multicultural population.

In the late 1950s, the QFHSA embarked on a detailed study of Quebec education that would foreshadow, and partly influence, the reforms of the Quiet Revolution. Known as Operation Bootstraps, this study consulted member groups and educational experts across the province at the very moment when the Union Nationale government that had been in power for 16 years had been defeated by the reformist Liberals.

Released in early 1961, the QFHSA’s report called for major improvement to science and library facilities in schools, more vocational training, and greater parental involvement. It also advocated a system of junior colleges as a transitional period between high school and university. These recommendations were submitted to the Royal Commission of Inquiry on Education under Alphonse-Marie Parent, which praised the brief for its outstanding degree of coherence and insight.

It is striking how many of the QFHSA’s 176 recommendations – the creation of a Ministry of Education, larger units of administration, regional high schools in rural areas, financial assistance for teachers wishing to continue their education, formal technical and vocational training, and of course the junior colleges – found their way into the Royal Commission’s Parent Report, which was released in several volumes throughout the 1960s. Through Operation Bootstraps, the Home and School movement found itself, along with much of Francophone society, contributing to a major reform of institutions that would define Quebec society for the next half century.

To Learn More
The Quebec Federation of Home and School Associations: http://www.qfhsa.org

I am the May 1st, 1963, issue of the Quebec Home and School News. I am an important issue of the newspaper published regularly by the Quebec Federation of Home and School Associations since late 1945 (then a newsletter), and still going strong. I provided extensive coverage of the first volume of the Parent Report, the result of the Royal Commission of Inquiry on Education undertaken by the newly-elected Liberal government of Jean Lesage. Coverage of such issues in my pages was a key service of the QFHSA to its members and other readers.

The Home and School movement has been a driving force in Quebec education since 1919. The Quebec Federation of Home and School Associations has been its provincial mouthpiece since its founding in 1944. From its origins, the QFHSA has advocated improvements to the physical and mental health of children as well as to education in general. On a number of occasions, the QFHSA has undertaken research on controversial issues that has led to significant change within Quebec society.