The Oldest Agricultural Fair in Quebec

Lachute Fair has earned bragging rights as the oldest agricultural fair in Quebec and the second oldest fair in all of Canada. Since its founding in 1825, the Lachute Fair has promoted pride in husbandry, rewarded excellence and provided a fun-filled event for the entire family. 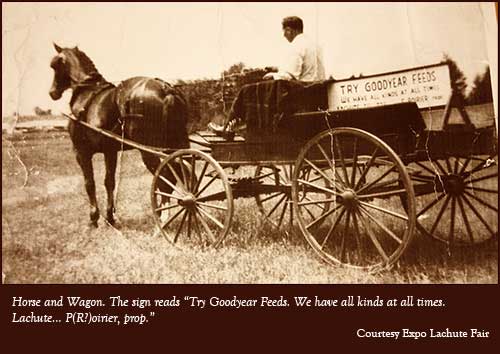 Unfortunately records from the earliest days have not been retained, so information concerning the first fairs is somewhat foggy. The souvenir programme celebrating the 150th anniversary of Lachute Fair (1825-1975), explains that the Fair was not always held in Lachute. “Cattle Shows and ploughing matches were held alternatively between Lachute (then called the Chute) and St. Andrews.” However, an article about the Argenteuil Agricultural Society states that during “its first fifty years, the fair rotated among the towns of Argenteuil, St. Andrews East, St. Philippe, and Carillon” (Stock).

Fortunately a four-page pamphlet from 1826, outlining the objectives and rules of the fair, has been preserved. It states: “The object of this Society is to promote, by its efforts and example, the science of Agriculture throughout the County; to give premiums in money or pieces of plate, agricultural publications or implements, to the practical farmers who shall excel in the art of ploughing, cropping, raising stock of all kinds, in the dairy, planting of fruit trees, and the general improvement of Farm and Home Manufactures”…“the rules of competition to be similar to those adopted by the Highland Society of Scotland” (Stock).

The Fair, powered by English-speaking volunteers, was initially held at harvest time. At the time of Confederation (1867), the fair was a bustling concern, with exhibits of wool ready to be spun, fancy work and linen, as well as many classes of wheat, rye, flax, barley, white beans and peas. Apples, pears, grapes, butter and cheese were displayed in abundance, and the barns were filled with carriage horses, mares with foals, stallions, fillies, cows, bulls, rams, ewes, boars, sows and lambs. 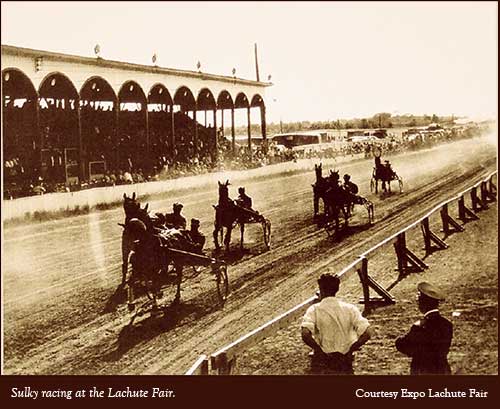 A permanent site for the fair was eventually established on the outskirts of Lachute, because it was served by the railroad and was considered a central point of the county. In 1877, Henry Hammond donated 15 acres for exposition grounds. The grandstand and racetrack were constructed in 1917, and new cow and horse barns were built as time and money allowed.

Through the years, building repairs and new constructions have been funded, in large part, through donations, and much of the work has been accomplished by volunteers. A heavy horse barn was built in 1985, and in 1994 a generous donation from Storrs McCall allowed for the construction of a new dairy barn. A new arena was erected in 1995 and the grandstand was covered in 1997.

Expo Lachute Fair is much more than its physical site or buildings. An editorial that appeared in the Montreal Gazette in 1953 states: “The county fair is a Canadian institution which has played a prominent part in the progress of the nation, the maintenance of cherished traditions and the formation of the character of the people.” ... “It, for many generations, has promoted pride in a husbandry which long since has placed the maple leaf trademark of Canada at the top for many agricultural products in the markets of the world.” Good-natured rivalry among exhibitors helped to raise the bar with each passing year. Crops were improved, animals were bred for excellence and farm products were refined.

The Fair has evolved to reflect the changing landscape of farming technology. As agriculture became more mechanized, the Fair included events such as tractor pulls. Traditional skills and products are celebrated alongside newfangled innovations, and in this way, the exposition provides valuable links between past and present methods.

A tradition that began when most of Quebec society was rural dwelling, the Lachute Fair provided a rare and well-deserved holiday from the hard physical labour of the farm. The social event of the year, it brought the community together in a joyous celebration of agriculture, competition and expertise. Today, although many people have left the farms, the Fair draws an annual crowd of between 8,000 and 10,000 people. Attendees come from the surrounding communities, and many who have moved away schedule their vacations to coincide with fair time, and make an annual trek back home to reconnect with school chums and family.

Current Fair President Scott Lees has attended the exposition every year since his birth. It’s a family tradition. During his life, he has witnessed many young 4-H exhibitors grow up to become adult exhibitors and the volunteers who keep the fair functioning. He says funding from Ministère Agriculture, Pêcheries et Alimentation Québec helps keep the fair afloat.

This artefact, an iron horseshoe on display alongside Lachute Fair memorabilia in the Argenteuil Regional Museum, is an appropriate symbol for a solid event that began with a ploughing competition and has endured for nearly 200 years. Deceptively simple in appearance, it supported the great weight of a workhorse, just as the fair supported agricultural excellence, food security and community.

With mounting interest in terroir (local) products and the “100-mile diet,” modern-day Quebeckers are realizing that locally-sourced fresh food is nutritious, delicious and ecologically sound—facts that farming folk have promoted for generations.

I am a horseshoe that bore the weight of a workhorse. My brothers and I shod the feet of generations of horses that took part in ploughing competitions at the Lachute County Fair. Displayed as a memento from bygone days, I hope I bring luck to many fair days to come.

The Lachute Fair is one of the oldest continuous fairs in Canada. The first Argenteuil County Fair was in 1825 at St. Andrews East. This village was the largest and most prosperous in the then Seignory of Argenteuil. In its first 50 years, the Fair rotated among the towns of Argenteuil before being permanently located in Ayersville on the outskirts of Lachute in 1877. From its original one-day show, the Lachute Spring Fair has grown to be “one of Canada’s leading agricultural expositions.” Spreading over four days of intensive competition, exhibitors come from Quebec and Ontario, as well as the United States. Though the Fair has changed with evolving economic and social trends, there remains a basic continuity and a strong tradition of displaying the achievements and skills of the people and animals of Argenteuil County.