Lennoxville, originally called Little Forks because of its location at the site where the St. Francis and Massawippi rivers flow together, began as a settlement of English-speaking peoples. Many of these were Loyalists who emigrated from the New England states at the time of the American Revolution, around 1776. Today, although the demographics have shifted, it is still regarded as an area of special importance to the Anglophone population of Quebec.

We’ve all heard the expression, “Thick as a brick.” Well, this particular brick gives it new meaning, since it is a brick that is “thick” with both history and significance for the Eastern Townships of Quebec, especially the town (now borough) of Lennoxville. It is solid, 9 cm x 20.5 cm x 5.5 cm (5" x 8" x 2.25"), and of a pinkish-brownish-reddish hue, with some bits of mortar adhering. Cool to the touch and weighing 2 kg (4.6) pounds, it was produced around 1930, based on the raised inscription on the brick which reads” LENNOXVILLE CANADA.” It forms part of the Lennoxville-Ascot Historical and Museum Society (LAHMS) collection, located in the Uplands Cultural and Heritage Centre, Lennoxville (Sherbrooke). 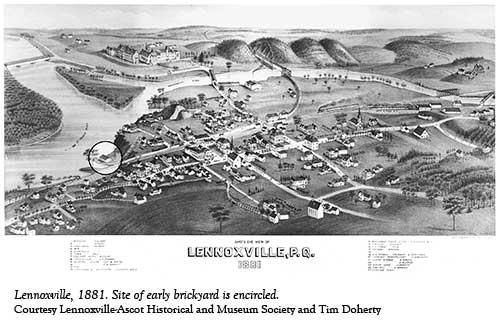 Why is brick such a popular construction material in the Eastern Townships of Quebec, and especially in Lennoxville? Any local resident who has ever tried to turn over the earth to plant a garden or excavate a basement has likely found himself confronted by solid clay, a substance that, although not as hard as rock, is still extremely difficult to dig through. On the plus side, with so much clay in the earth, it is not terribly surprising to learn that there was once a thriving brick-making industry in the area.

Bricks have been used as construction material since ancient times throughout the world, notably in the Middle East, Rome, Europe and China. According to the Encyclopedia Britannica, “The brick, first produced in a sun-dried form at least 6,000 years ago and the forerunner of a wide range of structural clay products used today, is a small building unit in the form of a rectangular block, formed from clay or shale or mixtures and burned (fired) in a kiln, or oven, to produce strength, hardness, and heat resistance.”

According to the reference books, Lennoxville Volume 1 (LAHMS, 1975) and Lennoxville Volume 2 (LAHMS, 1981), brick making in Lennoxville dates back to the 1880s. An early brickyard was once located on Conley Street on the shore of the St. Francis River, as well as on Glenday (formerly Brickyard) Road adjacent to the Agricultural Research Station, also known as the Experimental Farm.

The Eastern Townships Brick and Manufacturing Company was founded in 1902 by a group of prominent Sherbrooke businessmen, including the Messrs Webster, Mitchell, McManamy, Hale, and Fletcher. Their enterprise was located on the Brickyard Road clay fields close to the CPR main line, enabling efficient rail transportation for shipment of the brick to other centres. Employing 20-50 men, depending on the season, this brick plant proved a great success for many years, with an annual output of approximately one million bricks. British workers experienced in brick making were employed to make the bricks, which were marketed throughout the Eastern Townships, as well as some parts of Vermont, Montreal and the Laurentians. Locally, horse drawn carts were used to deliver the bricks.

An important part of brick manufacture involved firing the bricks in wood-stoked kilns, and hard maple wood, in good supply in this area, was favoured. The original kilns were outdoors and resembled large beehives, eventually being replaced by a gas producer, large kiln, and drying system. The company was bought out in 1914 by W.E. Loomis, but by 1930 the demand for wire-cut brick, a popular style produced at a plant in nearby East Angus - which the Loomis company never mastered - eventually put the Lennoxville operation out of business. Just prior to that however, two other firms spent a few months trying to keep the plant going, producing bricks under the names Lennoxville Canada and Sherbrooke Brick.

An important incentive for using bricks in construction in Lennoxville arose following the devastating fire that occurred during the hot, dry summer of 1874. “Fanned by a strong south wind, the burning shingles were carried far and wide, starting fresh fires everywhere.” (Excerpt from William H. Abbott’s memoirs, Lennoxville, Volume 1). A by-law was subsequently passed in April, 1875 “...prohibiting the erection of any wooden buildings, connected or detached, within the limits of Lennoxville - buildings to be exclusively stone, brick, brick-cased or rough cast...” (Lennoxville, Volume 2).

Brick structures still abound in Lennoxville and the surrounding area. Bishop’s University, one of the area’s most distinguished and distinguishing landmarks dating back to 1843, is comprised of several magnificent old brick buildings, in particular McGreer Hall and Divinity House. Local homeowners in older houses often find that replacing their original bricks with matching modern ones is nearly impossible. Today’s bricks, produced outside of the Eastern Townships in highly mechanized mega-facilities, come in many shapes, colours and sizes, but clearly lack the character and warmth of those produced from local clay in the brickyards of yesteryear.

A huge expression of gratitude goes to LAHMS, in particular Dorothy Deacon Hudon, Lu Rider (Archivist) and Janice Fraser (Coordinator of Collections and Exhibitions) and the many contributors to Lennoxville, Volumes 1 and 2. It was clearly a labour of love, requiring extensive research and finely honed writing and editing skills.

Author
Melanie Cutting is a retired educator living in the Eastern Townships. A graduate of the Professional Writing Program of the Université de Sherbrooke, she occupies her time doing occasional writing, editing and translation work, as well as numerous volunteer activities.

I have been researching brickmaking in western Canada for about 20 years, and have made contact with a number of people who have a similar interest throughout North America. However, I have not been able to link with anyone in Quebec. If you know of people who might wish to join our Brick Research Group, please have them contact me at: frank [at] korvemaker.ca. Thank you.

I got this from the for the Quebec mining report:http://gq.mines.gouv.qc.ca/
:Another active location was near Lennoxville on lot 9, range IV
of Ascot township. There the Eastern Township Brick and Tile Manufacturing
Co. opened a clay deposit in the early years of this century sold the
brick plant to W.E. Loomis in 1917. From 1922 to 1925, the brick plant was
operated by The Sherbrooke Brick Co. Ltd and from 1925 to 1928 by the
McGrea-Wally Brick Co. Ltd. The last operator was Lennoxville Brick and
Tile Co. Ltd. who ceased operations in 1932.
I have found at my home a loomis brick, a lennoxville canada brick, a Mcrea Walley brick and a Mcrea walley Lennoxville canada brick. If you are interested I can send you some photos.
Alain Bédard

I am a brick that was manufactured at the Eastern Townships Brick and Manufacturing Company in Lennoxville, Quebec. I was made of clay, clearly stamped LENNOXVILLE CANADA, and fired to a reddish-brown hue. Bricks with my quality and character can be found in many of the historic structures in the region, including Bishops' University. Like bricks in a wall, the history of Lennoxville is held together by those who remember.

In many communities throughout Quebec, the use of brick rather than wood became more commonplace as the 19th century progressed. Municipalities passed by-laws prohibiting the use of wood as a building material in order to decrease the devastating spread of fire. In the first half of the 20th century, brick-making in Lennoxville, Quebec, contributed to the economic growth and influenced the architectural style of the community. The Eastern Townships Brick and Manufacturing Company was founded in 1902 by prominent Sherbrooke businessmen. Employing 20-50 men, depending on the season, this brick-making factory proved a great success for many years, with an annual output of approximately one million bricks.