From the time of Confederation until the establishment of an official, distinct Canadian flag, there was always some debate over what emblem would best represent the Canadian people. The “flag issue,” as it was known, first came to a head in the 1920s when Prime Minister Mackenzie King established a committee to find an appropriate design to represent Canada. Prior to this, Britain’s Royal Union Flag (Union Jack) had flown over the parliament buildings (since 1904), but many people favoured the Red Ensign. Various versions of the Canadian Red Ensign functioned as the country’s unofficial emblem, despite the fact that it had only been authorized for marine use and had no legal status on land.

The flag issue inspired a flood of letters to newspapers and magazines. Many individuals submitted proposals (designs on paper as well as cloth prototypes) in the hopes of creating an emblem for Canada, but it is difficult to imagine anyone more passionate and perseverant in this matter than Minnie H. Bowen.

Born Minnie Hallowell in Sherbrooke on February 4, 1861, she married Cecil H. Bowen in 1890. Members of the Bowen family were prominent citizens in the English-speaking community of the Eastern Townships and were also involved in politics. Minnie was active in various philanthropic, patriotic, religious and literary organizations including the Women's Auxiliary Missionary Society, the Sherbrooke Patriotic Association, the Imperial Order of the Daughters of the Empire, the Women's Conservative Association and the Canadian Authors' Association. She published six books/booklets of poetry, her literary texts appeared in newspapers and periodicals, and she was fiercely interested in the flag debate. 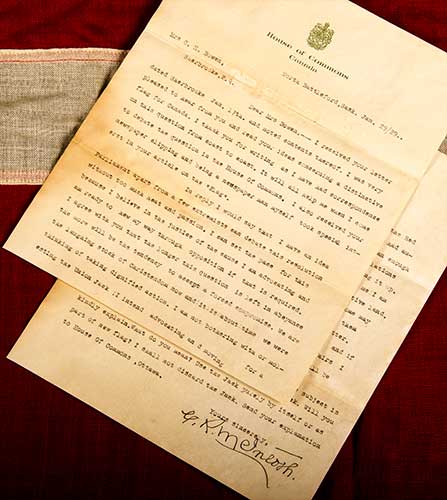 Indeed, Minnie’s interest in the flag appears to have begun as early as the 1890s, when correspondence indicates her concern regarding Canadians’ lack of a proper emblem, unique to the Canadian people. Her letters also testify to the fact that she had done extensive research on the history of flags—the British flag, in particular—and she understood the symbolism of design elements. When Prime Minister King formed a committee to find a suitable flag for Canada, Minnie was prepared. She had already put together her own proposal and established a clear argument for her design.

The Eastern Townships Resource Centre, located on Bishop’s University campus, holds Minnie H. Bowen’s original flag (circa 1920), which she proposed for our national emblem. The striking artefact is a machine-stitched flag that measures 56 cm x 97 cm, constructed of red, white and blue tightly-woven unspecified fabric (most probably cotton or linen). A white cross, which Minnie called “the white cross of sacrifice” was placed upon the Red Ensign, with the Union Jack placed in the upper left-hand canton.

The symbolism of Minnie’s design and her fervent belief that her flag should become Canada’s national symbol are best expressed in her own words, as articulated in The Ottawa Evening Journal, September 25, 1930:

“It is a simple, clear design, easily distinguished, not to be mistaken for any other. It does not exalt any section or race, but represents the whole. It is rich in color, striking in effect and in beauty would rank near the white ensign and the Union Jack. It does not go to the animal or vegetable kingdom for appeal, nor to the stars nor to race, with its precious inheritance of ideals, language and blood. These are lesser things. It appeals by the sign, which is the highest revelation of the spiritual world, devoted sacrifice. It would represent the heroic sacrifices by which Canada’s history was made. First, those of the French explorers, settlers and missionaries, who, under their white banner, raised the cross in this land, followed by the sacrifices of all our pioneers, English, Scottish and Irish, and other races. By steadfastness, courage and devotion, these men and women gave Canada her soul.”

Minnie’s persistent campaign to have her design accepted as Canada’s official flag is witnessed by many letters in the ETRC archives. A letter dated May 31, 1927, from the Private Secretary of Prime Minister King states, “The Prime Minister has asked me to acknowledge the receipt of your communication of the 26th instant, with reference to a flag for the Dominion of Canada.” There are also letters on file concerning this issue from the House of Commons, Legation of the Dominion of 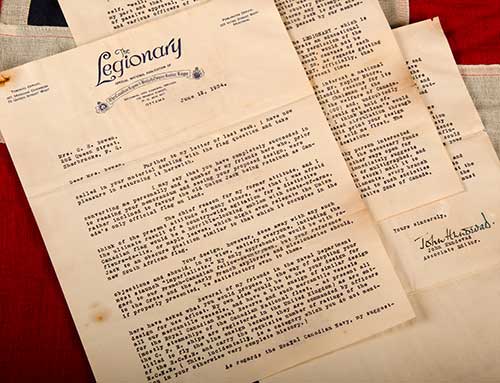 Canada in Washington, Manitoba Free Press Company, and Member of Parliament C. R. McIntosh (chairman of the International and Industrial Relations Committee). Correspondence and/or clippings from newspapers and magazines also bear witness to her unflagging resolve.

Certainly, Minnie was not easily put off, as exemplified by an undated letter to the editor of McLean’s Magazine, “In March, 1930, I sent you an article on the Flag Question with a covering letter. Owing to the number of letters that had already been published on the subject, the Editor did not consider it advisable to accept the article. As the Flag Question has again come to the front in Parliament and the interest in it is wide and unmistakable, I am sending in the article again…”

Minnie Bowen died in 1942, years before the flag issue would finally be settled in 1965. Although Minnie’s flag was not destined to become Canada’s chosen emblem, it did hang for a time, during the 1930s, in the editorial office of The Sherbrooke Daily Record, where the public was invited to view it and express their opinion.

Minnie’s flag is a symbol, not only of one woman’s perseverant, literate and passionate campaign, it also speaks to deeply held convictions, sentiments of identification and unity with other provinces, devotion to country, and racial inclusiveness—attributes which certainly were shared by many of her peers, English-speaking Townshippers who helped shape their province and their country.

I am the flag made by an ardent Minnie Bowen. Her vision of nationhood is sewn into every inch of me, in the belief that others would feel her pride and share her dream. I am the flag of inclusiveness, of courage and devotion to this country. In her mind’s eye, she can see me flying over Canada.

The establishment of an official, distinct Canadian flag was a long process that began in the late 19th century. In the 1920s, Prime Minister Mackenzie King established a committee to find an appropriate design to represent Canada. The flag issue inspired a flood of letters to newspapers and magazines, and many Canadians submitted proposals in the hopes of creating a permanent emblem for Canada. Minnie Bowen of Sherbrooke, Quebec, was one such individual. She not only created her own prototype, but mounted a personal campaign to have her flag accepted as the nation's flag.