In the lower reaches of a long street that Montreal’s English speakers have learned to call “Boulevard Saint-Laurent” and French speakers sometimes refer to as “la Main,” you’ll find a restaurant that opened its doors in 1912 and is still serving such down-to-earth delicacies as Hot Dog Steamé, Hot Dog Toasté, and Michigan (a steamed hot dog with a meaty sauce). The Montreal Pool Room is located just down the street from a music venue named Club Soda, and across the road from Café Cléopatre and its “strip-teaseuses.” If you want your steamie to come with chopped onions and cabbage, ask for it “all dressed.” You can munch it while sitting at a metal counter below a signed photograph of Patrick Roy, near a framed map of “Le West Island.” The décor is half austere, half kétaine. 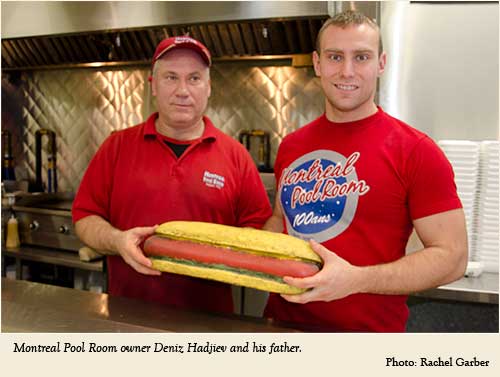 The unofficial mixture of languages that the Montreal Pool Room incarnates is nothing that would delight the inspectors of l’Office québécois de la langue française. “Poutine” may have become accepted as a pure laine French term, despite its probable origins in the English noun “pudding,” but “le cheese burger” hardly counts as standard French. The clientele of the restaurant don’t appear to mind. The French they speak is dotted with English, the English they speak is dotted with French: a rough-and-ready, grizzled embodiment of the bilingual city they share.

Montreal English is a unique dialect for several reasons. Compared with how the language is spoken elsewhere in Canada, it shows an unusual degree of Yiddish influence: you don’t have to be Jewish here to use expressions like “schlep” and “mensch” and “Enough already!” In the neighbourhood of St. Léonard – always pronounced, in Montreal English, so as to rhyme with “leotard” – the widespread Italian presence affects the cadences and pronunciation of English. But the dominant influence on the English spoken throughout the city, indeed the whole province, is French.

Look at the first two paragraphs of this essay. Throughout the world, English speakers rely on such French-derived terms as “restaurant,” “delight,” “décor,” “boulevard,” “venue” and “clientele.” But only in Quebec do English speakers casually use words and phrases like “steamie,” “pure laine,” “all dressed” and “kétaine.” The influence of the French language is most obvious on the level of vocabulary, yet it has a subtle impact on grammar too. Children come home from English-language schools and tell their parents that they scored “eight on ten” on a math test – a direct translation of “huit sur dix.” In other parts of North America, “eight out of ten” is standard. 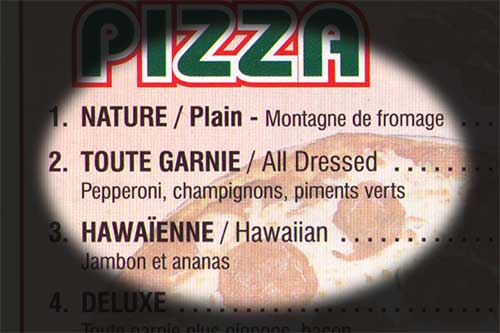 The most famous example of French influence, of course, is the word “depanneur,” often shortened to “dep.” Purists, I realize, would add an acute accent, spelling the word “dépanneur” – but when Montrealers speak English, the first syllable of that word always rhymes with “step,” not “shape.” Other French-derived expressions that suggest a working-class experience are “three and a half” (an apartment with three rooms plus a bathroom), “caisse pop” (few if any Quebecers would talk about a credit union) and “gallery,” in the sense of porch. Mind you, on the Lower North Shore, where the rich and salty dialect of Newfoundland exerts a gravitational pull, a porch is often called a “bridge.”

Increasingly, though, Quebec English has a bourgeois feel. In the 21st century much of its linguistic code-switching and borrowing reflects the political power and social prestige of French. Let’s suppose that after enjoying the vin d’honneur at a cinq à sept, you need an allongé before you reach the vernissage. (Habitués of the Montreal Pool Room might not recognize some of these idioms.) Less obvious than those direct borrowings are the many words and expressions that form part of standard English but are used more often, or differently, in Quebec. “Formation” instead of “training;” “dossier” rather than “file;” “permanence” in place of “tenure;” “consuming” drugs as opposed to “taking” them: the examples are legion. When the meanings of words in Quebec English diverge from those in the North American mainstream, as they sometimes do, is the discrepancy merely an error, or is it a sign of vibrant cultural difference?

I’ll leave it up to you to decide. Think of this as a communiqué, not an exposé.

I’m the big bilingual sign outside a Montreal restaurant. That’s a fancy word – call me a greasy spoon if you prefer. Nobody marches through my doors looking for gourmet cuisine, and nobody shoots pool here either – it’s been decades since I contained a pool table. I’ve been serving warm meals to working people for more than a hundred years, and I do it in a mix of languages. I don’t care whether customers order their hot dogs in English-coloured French or French-coloured English. I just fill their bellies with food. Then they go out and fill the city with words.

Montreal is unthinkable as a unilingual city: its whole character depends on the bubbling mixture of French and English. Not surprisingly, the dialect of English spoken here shows a French influence that is absent from other North American dialects. The city’s English speakers have borrowed or stolen many French words, and in recent decades they have also begun to adopt the French meanings of some familiar English terms. Today the power of French is noticeable even on the level of English grammar. It’s an influence that in the future is likely to keep on growing.