Described as a “true Quebec religious heritage treasure” by the North Shore Community Association, the stained glass Nativity window designed by Clara Fargo Thomas of New York reflects the presence and influence of the English-speaking community in the North Shore region of Quebec. Commissioned by the powerful Chicago businessman, Colonel Robert R. McCormick (1880-1955), this stunning window is located in the Tudor style Anglican Church of St. Andrew and St. George in Baie-Comeau, Quebec. Colonel McCormick, who founded the town of Baie-Comeau in 1936, donated the window in memory of his wife, Amy Irwin McCormick. It was installed in the church sanctuary in 1938. 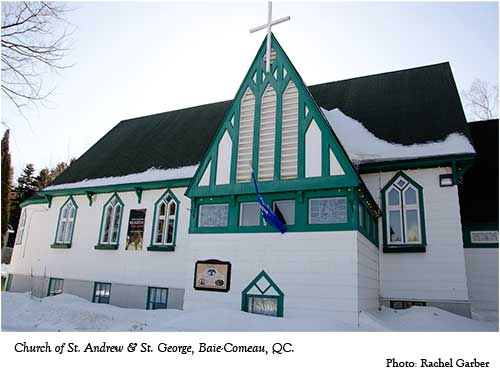 This window is one of several exceptional stained glass windows in the church. McCormick’s window measures 3.04 metres x 2.1 metres, with a heavy oak frame. It presents a nativity scene and is unique in its depiction of the wildlife of the North Shore. One can see many animals indigenous to the region including caribou, wolf, bear, duck, moose, and trout, all paying homage to the Christ Child. Also depicted in the lower left corner is “Ti-Basse” St-Onge, a Montagnais man who once saved the life of Colonel McCormick, and with whom he formed a lifelong relationship.

The story of this window also gives an understanding of the history of the economic development of the community, which is tied inextricably to the life of Colonel McCormick. McCormick, the wealthy American publisher of the Chicago Tribune, established the town of Baie-Comeau in 1936 and settled it with an English-speaking managerial class of professionals. To furnish his paper with newsprint, McCormick licensed rights to exploit thousands of acres of spruce-wood in the Manicouagan River watershed, constructed a giant pulp and paper mill to make the newsprint, and built a hydroelectric power plant to generate electricity for the mill in Baie-Comeau. These enterprises drew many other businesses to the region. The small English-speaking community included many mill managers, and later on, workers for the grain-shipping port and the Canadian British Aluminum smelter, which was established in the 1950s. Although he was an American publisher and businessman, his legacy in Canada includes the six towns he established for the purpose of forestry and paper production: Heron Bay, Gore Bay, and Thorold, in Ontario, and Baie-Comeau, Franquelin, and Shelter Bay (known today as Port-Cartier) in Quebec.

McCormick was a visionary and a shrewd businessman. Described as an aristocratic and egotistical millionaire, he had the means to satisfy his tastes and his whims. His fingers were in many pies, both financial and political. His accomplishments included acquiring a number of large American newspapers, creating his newsprint empire, and fronting his cousin in American politics. He was an isolationist strongly opposed to the U.S. entry into World War II, and was vehemently against Franklin Delano Roosevelt’s “New Deal.” After serving as a Colonel with the Illinois National Guard during World War I, he received a commission as Major in the First Cavalry. In 1916 he served with Brigadier General John J. Pershing in the American conflict with Pancho Villa’s Mexican Revolution. Realizing that weaponry was in too short supply and frustrated by the lack of response by the American army, McCormick supplied his troops with machine guns, ammunition and vehicles through significant personal contributions.

Although this was not generally known about him, McCormick was an outdoor enthusiast and was happiest travelling and exploring in the wild regions of the North Shore. Many statues have been erected in his honour throughout the territory, including a bronze statue of the Colonel canoeing in 1915. That was the year he discovered the land that would become the future site of Baie-Comeau. The monument stands proudly beside the pulp and paper mill he established.

This extraordinary stained glass window, commissioned by its equally extraordinary benefactor, can be viewed at the Church of St. Andrew and St. George at 34 Carleton Avenue for six weeks during the summer months when a guided tour is offered, and occasionally throughout the year.

Authors
Jacqueline Hyman is a writer and lives in the Eastern Townships. She is a member of the Board of Directors of the Eaton Corner Museum in Cookshire-Eaton, Quebec. Jody Lessard is the Executive Director of the North Shore Community Association.

I was wondering if someone couod take a picture of the sign near the road in front of the church. it has a picture of a minister and several children who just receive confirmation I. I happen to be one of the girls in the picture, but my camera was lost in Baie Comeau the last time I was there in 2004, and therefore do not have a picture. My email address is mossman [at] shaw.ca
Thank you so very much. I would be very grateful, if someone couod do this.

I am a unique stained glass window in the Church of St. Andrew and St. George in Baie-Comeau, Quebec. I bring blessings of light and colour to tell the greatest story ever told. Perhaps my beauty reflects the inner light of Robert R. McCormick who commissioned my creation. Known for his ruthless business sense, somehow he understood the peace of the forests and the tranquillity of the North Shore. I am light and colour juxtaposed against an imposing man.

The town of Baie-Comeau was established by wealthy American industrialist and newspaper magnate Robert R. McCormick in 1936. Publisher of the Chicago Tribune, McCormick exploited the heavily forested region of the North Shore to supply paper for his newspaper empire. His influence in the North Shore region included establishing towns, settling English-speaking workers, and building pulp and paper mills and a hydroelectric power plant. His love of the region and support of the English-speaking community he helped to establish is perhaps best understood in a stained glass window he commissioned for the Anglican Church of St. Andrew and St. George in Baie Comeau. He was an avid wildlife enthusiast. The importance of the landscape for Robert McCormick and in the lives of his fellow citizens is reflected in this beautiful depiction of the Nativity.