Golden Rule Lodge No. 5 and the Owl’s Head Basket

Golden Rule Lodge is steeped in history and tradition. One of the oldest Masonic lodges in Quebec, it traces its roots back to 1803, when Lively Stone Lodge was founded in Derby Line, Vermont. That lodge, composed of Masons from both sides of the border, met in a building situated half in Canada and half in the United States.

Golden Rule Lodge has occupied the same hall for over a century and a half. That hall, financed and built by Masons from both sides of the border, is the oldest functioning lodge building in Quebec. Situated on Dufferin Street in Stanstead, it was built in the Classical Revival style in 1860. Bearing a strong resemblance to a Greek temple, with pilasters, cornices and a pediment suggestive of the architecture of antiquity, the lodge is considered one of the architectural gems of Stanstead. It has undergone little alteration, and in 2009, was designated a heritage site by the Town of Stanstead.

The lodge’s interior is a testament to living history. The walls on the first floor are covered with photographs of early pioneers and leading citizens from both sides of the border. The more formal second floor is decorated with allegorical paintings pertaining to the teachings of Freemasonry. 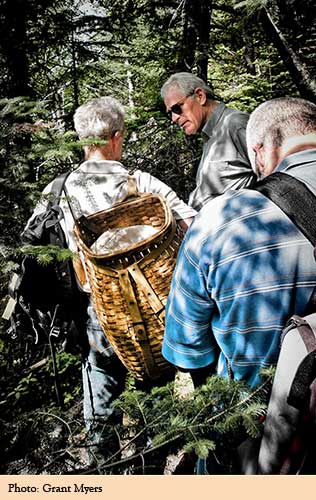 Golden Rule claims another distinction: it is the only lodge in Quebec permitted to hold an outdoor “communication.” Thanks to an 1857 dispensation from the Grand Lodge of Canada, Golden Rule holds an annual gathering atop the 2,425-foot (739-metre) summit of Owl’s Head Mountain, overlooking Lake Memphremagog.

In the over 150 years since this meeting was first held in the open-air lodge room (actually a natural cleft in the rock) at the summit, it has become one of the most popular events on Quebec’s Masonic calendar. It attracts members of the fraternity from around the province, and from elsewhere in Canada, the United States, and further afield. The event, which usually includes the “raising” of a new Master Mason, is a much-anticipated occasion for fraternal exchange. 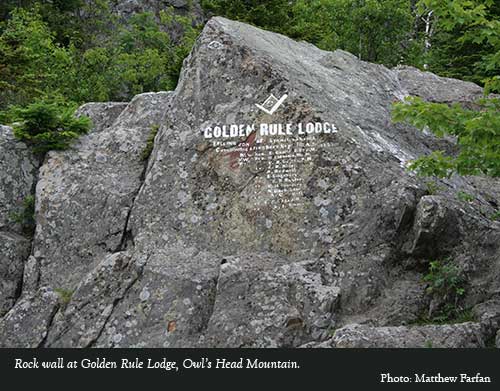 The ceremony, which takes place, rain or shine, each June, is a tradition of which Golden Rule Lodge is extremely proud. An unusual part of that tradition, and one that dates back beyond the memory of any living member, is that, as part of his raising, the candidate is required to climb Owl’s Head bearing a heavy backpack made of wicker and wood.

Referred to affectionately by members of Golden Rule as “the basket,” the backpack is well and truly loaded before its journey to the summit. Typically, it will contain ropes, a Bible, assorted Masonic tools and regalia, and the flags of Canada, the United States, and Quebec. When fully loaded, it will weigh about 60 pounds (27 kilos). The candidate must bear this burden alone as he struggles to the top of Owl’s Head. Once there, the formal and ancient ceremony of raising a Master Mason will begin.

Author
Matthew Farfan is a writer, editor and historian. The Executive Director of the Quebec Anglophone Heritage Network (QAHN) since 2011, he is the author of numerous articles and several books, including The Eastern Townships: In Town and Village (2006); The Eastern Townships: On Lake and River (2008); and the Vermont-Quebec Border: Life on the Line (2009). He is also the Master of Golden Rule Lodge. He resides in Stanstead, Quebec.

Wisdom, Strength and Beauty: Freemasonry in the Province of Quebec

Following the foundation of the Grand Lodge of London in 1717 by four lodges, Freemasonry soon spread to Europe and North America. British soldiers brought the world’s oldest fraternity to Canada at the time of the Conquest in 1759. They immediately created a Provincial Grand Lodge which was directly linked to London. A number of soldiers, members of the aristocracy and traders in New France were active Masons, as well, and although they were enemies on the battlefield, both French and British soldiers met in the same lodges. 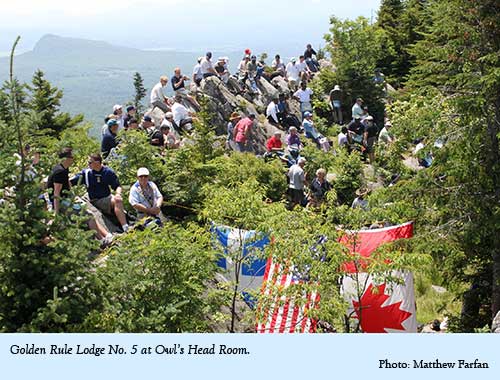 The oldest lodge in Quebec is Montreal’s Lodge of Antiquity No. 1. It is followed in age by Albion Lodge No. 2 and St. John’s Lodge No. 3, both in Quebec City. Dorchester Lodge No. 4 is in Châteauguay, and Golden Rule Lodge No. 5 is in Stanstead.

The growth of Masonry in English Quebec encouraged French-speaking Masons to open their own lodge in Montreal, the Loge des Cœurs-Unis, in 1870. Only one year earlier, in 1869, the Grand Lodge of Quebec, with 28 individual Masonic lodges, had been founded under Grand Master John Hamilton Graham. Currently, the Grand Lodge of Quebec numbers 75 member-lodges, 11 of them Francophone. The total membership is about 4,500.

From the beginning, Masonic lodges were visited by the most “respectable” English-speaking citizens who were attracted by the qualities of Freemasonry. For them, Masonry was a kind of “club” where they met other men of good reputation. The spirituality of Masonic rituals and ceremonies also met their needs. As they still do today, Masonic lodges organized activities to help the poor and assisted with other charitable causes, such as funding hospitals and helping orphans.

Masonry only really started to flourish in French Quebec after the Quiet Revolution of the 1960s. Today, solidarity and tolerance have become a part of Quebecers’ consciousness. Helping sick or disabled people without discrimination, and working to improve society, Masonic organizations such as the Shriners serve as models for everyone.

Freemasonry, which requires a belief in the existence of a supreme being, is about searching for truth outside of the formal bounds of churches. Their quest leads Masons to the symbolic meaning of objects. For Masons, a symbol is a visible sign with which a spiritual feeling, emotion, or idea is connected. Symbolism is universal; as such, it is the primary Masonic tool in the building of a universal Brotherhood.

By means of its objects, its vocabulary, its literature, its rituals and ceremonies, its benevolence, and its example of a system of morals, Freemasonry offers a philosophy of life and a true worldwide fraternity. In Quebec, the fraternity has become a centre of harmony, help and friendship for all Quebecers.

Built on the strictest respect for the constitutions of the Craft, Masonry seeks to marshal energy and good will, and to promote the growth of the noblest feelings among men. On its cornerstone of tolerance and brotherly love have been built walls of wisdom, strength and beauty.

Author
Jacques G. Ruelland, Ph.D. teaches history at the Université de Montréal. He is a museologist and a writer. He is Past District Deputy Grand Master, Past Grand Secretary, and Librarian of the Grand Lodge of Quebec. He is a Past Master of the Loge Jean T. Désaguliers No. 138.

I am the basket owned by the Masonic Golden Rule Lodge No. 5. Woven ash, wooden frame and canvas straps promise that I can carry a heavy load to the summit of Owl's Head. I am filled with objects of ceremony and tradition. Heavy as a stone, my burden must be carried alone.

Freemasonry is an ancient fraternal organization that is widely involved in charitable and community service activities. Following the foundation of the Grand Lodge in London, England, in the 18th century, Masonic lodges spread throughout Europe and North America. Golden Rule Lodge No. 5, founded in 1803, is one of the oldest Masonic lodges in Quebec. It is the only lodge in the province permitted to hold an annual outdoor “communication” or gathering at the summit of Owl’s Head Mountain in the Eastern Townships. The basket is a wicker backpack which is filled with ceremonial items that must be carried by a candidate seeking to become a Master Mason.