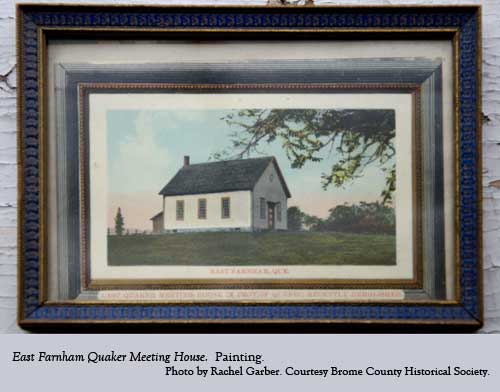 I tried to leave a message on your website Quaker Cupboard and Library but I am sort of wordy and it timed out so decided to send you an email instead.

I have been researching my husband's Jewell (Henry born 1798ish and Sarah Nettleton born 1800 ish) family that emigrated to Quebec from New England. I don't know where from, some trees online say Massachuesetts, others say Vermont. His wife apparently was from Vermont. There first child John Henry was born in 1826 in the U.S. as well. I have seen trees that state that Henry Jewell came to Eastern Townships but my Henry had his other kids starting in 1830 on Allumette Island, Pontiac County, on the Ottawa River. Did he go to the Eastern Townships first and then made his way to Allumette Island? Who knows. Did he meet Sarah in Canada? I think that could be possible as the census I have seen for him living in Brome, I believe he was living with a group of men. I have heard that Quakers do keep wonderful records and was wondering if you have anything on a Henry and Sarah Nettleton Jewell.

I do live in the U.S. but have a home in the Montreal area which of course, we can not visit presently. If you have records, I would make it a point of visiting. One last thing, He is buried in the Catholic cemetery in Chapeau, Allumette Island but he was listed as Quaker on other trees so I am thinking that he was Quaker and perhaps could not meet in the Ottawa Valley???? So many questions, I have.

Thanks for your consideration. Jo-Ann O'Neill

P.S. I live very close to many Quaker cemeteries here in NJ and Philadelphia, if ever someone has a need for a look up, I would be happy to do so. Thanks.