“No single event has had such a tremendous influence on the early development of the Eastern Townships, especially the St. Francis Valley, as the construction of the Grand Trunk Railway. The old methods of transportation by water carriage along the St. Francis and Nicolet Rivers to market towns of Quebec, Montreal and Three Rivers or by tedious stage coach over badly constructed roads soon became a thing of the past. Richmond County, being traversed by its main line along the St. Francis River and the Quebec division (the Quebec and Richmond Railway, Q&R) running northward, owes much of its later growth to the railway operations.”

This railway was known as the Grand Trunk in Dr. Hayes’ day, but when it first arrived in Richmond in 1851, it had been chartered as the St. Lawrence and Atlantic Railway (SL&A). The SL&A was one 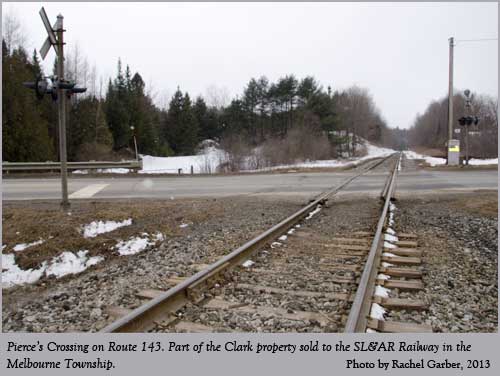 of the first of the large-scale railway projects in Canada, and its completion put Richmond and the other Eastern Townships centres on the map. As stated by Dr. John Hayes, “The opening of newly found markets on the American side for the products of the settler and easier year-round access to the older markets brought about increased opportunity for the utilization of natural resources of forest, farm and mine: as a result Windsor Mills Danville, Brompton falls, Kingsbury, Melbourne, Richmond had taken on new and growing importance.”

This document entitled Memorandum of an Agreement between Betsey Clark and the Saint Lawrence and Atlantic Rail-Road Company, dated April 14, 1848, is a legal paper that was one of many important legal documents that led to the building of the SL&A. The typewritten document on legal-size paper has become dull grey with age but is in remarkably good condition, and the sections handwritten in ink are easily read. It has been wrapped in acid-free tissue and file folder and is stored at the archives of the Richmond County Historical Society.

This document was an agreement for Betsey Clark to sell land for her daughter Julia who was living in Nashua, New Hampshire, to the SL&A for the construction of the railway through her property in Melbourne Township. Initially, for the purpose of surveying, laying out and establishing the line, a sum of five shillings was paid. The SL&A then agreed to pay one shilling currency per acre for the land that was to be used for the railway line. Upon completion of “a good and sufficient deed” an additional four pounds currency was to be remitted to Betsey Clark.

The Clark property was part of Lot number three in Range 8 of Melbourne Township on the west bank of the St. Francis River, directly opposite today’s Wales Home, a residence for seniors and one of the area’s most prominent landmarks. This railway development took place within close proximity the oldest standing structure in the Township, the Clark Schoolhouse now known as the Old Stone School. It meant the creation of a level crossing with the existing road, Rte. 143 between Melbourne and Drummondville, known as Pierce’s Crossing.

The sale of the Clark land to the SL&A in 1848 was key to the railway’s development in the Richmond area, for the railway was originally planned to pass through Melbourne, not Richmond. 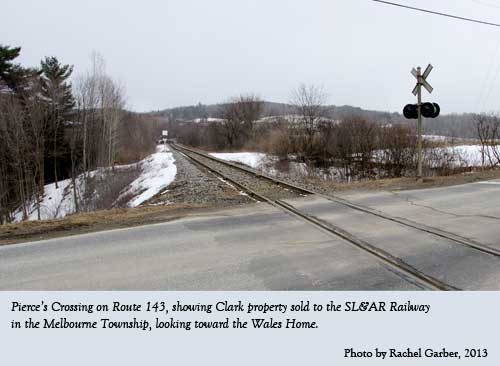 Nevertheless, political manoeuvring by Richmond officials shifted the route to the Richmond side of the St. Francis River and resulted in the need for a railway bridge. This was a costly venture for the railway builders, because it required another bridge at Brompton Falls to lead the rails back to the west shore of the river and into Sherbrooke and beyond. The Dominion civil engineer engaged for the purpose of building the Richmond bridge was Casimir Gzowski (great-great-grandfather of the late Peter Gzowski of CBC fame). The bridge, completed in 1851, stretched from Clark’s land on the west riverbank to the east shore of the river, north of Richmond.

In 1853, Richmond became a junction for the Quebec and Richmond Railway line positioned on the east side of the railroad station and the newly named Grand Trunk Railway on the west side of the station. The advantage of a rail link to Portland, Maine, and Montreal meant new employment and trade opportunities for the people of the Eastern Townships. The prospects of economic growth as a result of the new faster mode of transportation seemed endless. In a study of the rail heritage of this region of Southern Quebec, documents such as the Clark Memorandum of an Agreement with the Saint Lawrence and Atlantic Rail-Road Company are essential elements in the history of the community.

NOTE: It should be noted that contracts signed by women were not common during this period, and they would become non-existent shortly after. In 1866 The Civil Code of Lower Canada was enacted. Based on the Napoleonic Code of 1804, it declared married women legally incapable. Under the law, married women could not act as legal guardians, defend or undertake a legal action, or enter into contracts (Conseil du statut de la femme, The Long March Forward, a History of Women’s rights” Quebec: Gouvernment du Québec, 2008). (Contributed by Brenda Hartwell, editor.)

I am a railroad land agreement. I bear the signature of Betsey Clark, who by her hand was as responsible for laying down miles of track as any man wielding a sledge-hammer to pound in the spikes. Like other land agreements, I hold the legal text that allowed the iron rails of the St. Lawrence and Atlantic Railroad to stretch across the rolling hills of the Township of Melbourne.

The Betsey Clark Memorandum of an Agreement with the Saint Lawrence and Atlantic Rail-Road Company (SL&AR) represents an important document in the history of the Estrie region in the Eastern Townships. Dated April 14, 1848, this legal text was key to the railway's development in Richmond County. The SL&AR was one of the first large-scale railway projects in Canada and served as a “short-line” link between Portland, Maine, and Montreal, Quebec.