During the 19th century and part of the 20th century, many Quebec seniors lived in close proximity to their adult children and grandchildren. Family could easily drop by to check on an elder’s well-being. As physical distances between family members grew, the telephone became a critical tool for checking in on someone. A phone call provided connection and a means to ascertain if all was well. Today the telephone remains an important tool in the caregiver’s toolbox, but as demographics shifted and many English speakers moved out of province, community volunteers often assumed the role of caregivers for Quebec City’s English-speaking seniors.

The English-speaking population of the Quebec City region has changed dramatically. It has gone from being a vigorous community with 51 % of the population in 1851 to a minority of 1.9% in 1996 (OCOL). This trend of out-migration, particularly among younger generations seeking employment opportunities, has left many English-speaking seniors isolated without the benefit or security of family caregivers. 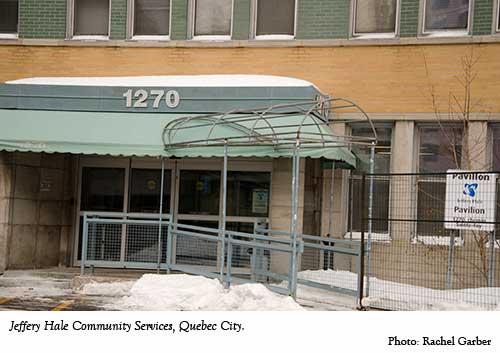 This artefact, a black Western Electric Model 500 rotary phone now housed in the archives of the Jeffery Hale Community Services building, is a symbol of the strong tradition of caregiving and volunteerism within Quebec’s English-speaking community. It was originally housed in the Holland Centre, which was created in 1991 by seven organizations that were built upon the cornerstones of philanthropy and volunteerism (Quebec Ladies’ Home Foundation, Congregation of the Catholics of Quebec Speaking the English Language, Jeffery Hale Hospital Foundation, Jeffery Hale Hospital Corporation, Saint Brigid’s Home Inc., Saint Brigid’s Home Foundation and Citadel Foundation). Holland Centre’s mission was to improve access to health and social services for the city’s English-speaking minority, and one of its first initiatives was “A Telephone Check In,” a volunteer-based service for seniors.

Each morning between nine and nine-thirty, volunteers would call seniors to assure that they were safe and sound. This service was offered seven days a week, 365 days a year. If a senior failed to answer the phone, another call would be placed five minutes later. If this call went unanswered, a third call would be made. If there was no response after three attempts, a protocol of action was put into place. A contact person would be alerted and, if need be, someone would be sent to the home to check out the situation. Many organizations now employ automated calls to contact isolated seniors, but Jeffery Hale Community Services (formally known as Holland Centre) maintains the tradition of the human touch—people reaching out to people.

These check-in calls are limited to five minutes because most volunteers call several seniors each morning, and they must complete the calls within the designated half-hour. However, if a senior sounds lonely (something a computer cannot detect), volunteers may call back later for a longer “Friendly Chat,” another of the many volunteer-based services offered through Jeffery Hale.

“The Jeff” as it is fondly called by many of its users, is the namesake of philanthropist Jeffrey Hale, who was born on April 19, 1803, in Quebec City. During his lifetime he generously donated his time and resources to improve the health and welfare of Quebec residents. Upon his death in 1864, Hale “left £9,000 for the founding of a hospital to care for Protestants of all denominations” (Dictionary of Canadian Biography Online).

Presently, Jeffery Hale Community Services, located at 1250 chemin Sainte-Foy, provides a variety of CLSC-type health and social services in English. Its aims are to provide quality services and to develop programs adapted to meet the needs of the English-speaking community of the Greater Quebec City region. “The Jeff” continues to foster and benefit from the strong tradition of volunteerism in the English-speaking community. In fact, their website states: “we simply could not offer the wide range of services that we do without the help of our caring volunteers.”

Over the years, services have evolved to meet specific needs identified by the community. For example, it was discovered that seniors were not the only segment of the population affected by isolation. Several networking activities were designed to support parents of young children and to break the isolation that many experience at this stage of their lives. Twice a month, parents of infants can attend “Baby Chat Café” to hear talks on parenting and exchange tips. “Take-a-Break Drop In” supplies an opportunity for parents with young children to relax with their peers, while volunteers care for their children.

The Community Christmas Hamper Campaign provides one of the best examples of volunteer engagement within the city. Each year over 200 Christmas hampers are distributed to households in the Quebec City Region. In collaboration with 22 community partners, Jeffery Hale collects monetary donations and non-perishables then organizes a legion of volunteers to sort the mountain of groceries, fill the hampers and deliver the goods. Although this initiative requires a tremendous amount of manpower during a busy time of the year, it attracts willing volunteers of all ages. It mobilizes an entire community to work toward a common goal, for the common good—and builds community as a by-product.

Supplying Christmas baskets to those in need is a very old tradition, but it remains relevant. That old-fashioned rotary telephone may be technologically out-dated, but it still works. It sits solidly upon a desk in the Jeffery Hale building, an enduring symbol of the deep-rooted tradition of volunteerism within the English-speaking community of Quebec City. “Culturally-appropriate services are ones that take into consideration the client’s background, beliefs and needs”(Walling et al) and certainly the human touch provided by “The Jeff’s” compassionate staff and caring volunteers meet many of the needs within their community.

“Volunteering is the ultimate exercise in democracy. You vote in elections once a year, but when you volunteer, you vote every day about the kind of community you want to live in” (Anonymous).

In the past, English-speaking citizen volunteers in Quebec City and throughout the province have helped to shape a just and caring society, and they continue to do so today.

To Learn More
Western Electric: A look at the evolution of the Dial Telephone. http://www.arctos.com/dial/

Contributor
Richard Walling is Executive Director of the Jeffery Hale Community Partners and Vice President of the Board of Directors of Jeffery Hale – Saint Brigid’s.

I am the Western Electric Model 500 rotary telephone that was used at the Holland Centre – now a part of the Jeffery Hale Community Services in Quebec City. In the hands of a volunteer calling seniors in the community, I listened for cries of despair and loneliness and allowed caring voices to keep a community connected and protected.

With deep roots in Quebec City’s English-speaking community and a long tradition of caring, Jeffery Hale Community Services is a public institution dedicated to providing safe, compassionate and high-quality care. Together with its partners in the health and social services network and community volunteers, Jeffery Hale Community Services plays a pivotal role in the English-speaking community and fosters its vitality. It spearheads concerted actions that promote the development of this community and the health and well-being of its members.