The economic activities of any region can change over time, due to evolving technologies, population growth or decline, social and political developments and environmental effects. The Gaspé south coast on the Bay of Chaleur once had a thriving resource-based economy, now greatly diminished. This intense lumbering, fishing, farming and trading network supported its own shipbuilding industry from earliest days of European settlement – the late 18th century – until recent times.

The representative heritage objects from the Gaspesian British Heritage Village in New Richmond are antique shipbuilder's tools: callipers and a joiner plane. New Richmond was once a centre of the shipbuilding trade, but now this industry is long vanished and tourism is one of the chief economic supports of the community. Heritage tourism, a growing sector of the trade, is successfully promoted by the Village.

In New Richmond, the first shipbuilders were the Duthie brothers, George and John, who came from Scotland in 1755. John Duthie built the first large vessel that sailed the route from New Richmond to Quebec City. This is described in merchant Charles Robin's diary in 1787: “...his (John Duthie's) vessel is all planked on one side and half on the other side. She is a fine vessel, well built and strong, but sharp. She will sail fast, but carry the less. She will measure about sixty-four tons.” This was quite a large ship for the times and her route was very dangerous, as the Gulf of St. Lawrence and the St. Lawrence River towards Quebec City were full of sandy shoals, rocks and small low lying islands. This area was notorious for wrecks.

William Cuthbert, also from Scotland, started another shipyard in the 1820s on the former Duthie site. Cuthbert's vessels sailed to Europe and the West Indies. Mostly lumber was traded out and goods such as molasses, rum and sugar from the West Indies and manufactured items from Britain and the Continent, were brought back. Captains Hugh Doddridge and John Campbell of Prince Edward Island also carried on a busy trade with salted herring, cod and mackerel in this often three-way Caribbean-Britain-Canada circuit. However, the greatest amount of trade out of New Richmond was with other Canadian posts such as Quebec, Halifax and St. John's. Also, many non-local vessels, schooners and brigs wintered over at New Richmond.

It is believed that William Cuthbert & Company constructed at least 14 vessels in their shipyard at Duthie's Point, also known locally as Shipyard Point or Willet's Point. Two of the largest vessels build on the Gaspé coast in the first half of the 19th century were products of the Cuthbert shipyard. These were the Saxon, 787 tons, and the Cuthbert, 914 tons, built in 1848. This was a major industry, employing many skilled ship's carpenters, sail makers and other specialized artisans. 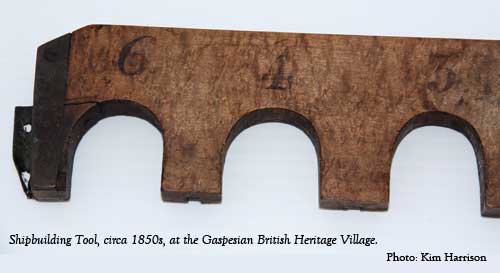 The artefacts from the Gaspesian British Heritage Village that represent this now long vanished shipbuilding industry are callipers and a jointer plane. Callipers are a measuring device that show the distance between two opposite sides of an object or an area. These precise tools have a very ancient history associated with ships as they have been discovered with wrecks from the old civilizations of the Mediterranean and of China. There is also a board to record calliper graphics, again used in measurement. The jointer plane was used for shaving and levelling wooden components of the ship and is a basic carpentry tool. These particular tools were made of very durable hardwoods and may have been fashioned locally by the workers themselves.

The Gaspesian British Heritage Village was established in 1984, initially to celebrate the bicentennial of the arrival of Loyalist settlers in Gaspé, particularly in the New Richmond area. This 40-acre centre has 24 buildings, all of local heritage importance, that were brought to the site, including a lighthouse. They date from the 1760s to 1903.

The Village contains a military museum, an art gallery, a forge, a genealogy centre, a schoolhouse and a post office. There is a large collection of historic items from the area, most related to everyday life and work. There are many activities held at the Village such as a Bluegrass Festival, Traditional Skills Days and other cultural events. The emphasis is on considering all aspects of Gaspé 's history such as the M'ic M'ac, Acadian, Loyalist and Scottish heritages of the area.

Authors
Sandra Stock is a Montreal writer and researcher. Kim Harrison is the Director of the Gaspesian British Heritage Village.

I am a calliper. I was used in building sea-going ships in the Gaspé. The builders used me to measure the distance between two sides of an object. Accuracy, evenness, precision – my task was to help create the finest of boats.

The heritage objects from the Gaspesian British Heritage Village in New Richmond, Quebec, are antique shipbuilder's tools: callipers and a joiner plane. New Richmond was once a centre of the shipbuilding trade in the Gaspé region. The Gaspé south coast, on the Bay of Chaleur, once had a thriving resource-based economy. This intense lumbering, fishing, farming and trading network supported its own shipbuilding industry from the earliest days of European settlement in the 1700s until recently. The tools represent this rich heritage and the English-speaking people who participated in the legacy of shipbuilding.