In an era when physical labour was the order of the day, manual tools were prized possessions of skilled tradesmen. One such tool, a slate cutter, is an important artefact at the Museum of Richmond County Historical Society. This slate cutter of unknown origin is 22 inches (55.9 cm.) long, 7 inches (17.8 cm.) wide and 4 inches (10.2 cm.) thick. It weighs 13 pounds (5.9 kg). The knife or blade is attached to a pine block and the handle with the knife falls to one side. 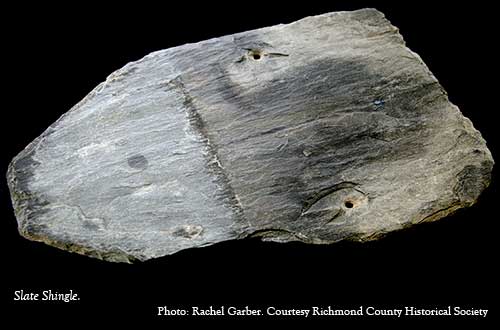 Slate cutters were used by skilled labourers to cut slate for roofing shingles, school slates or other small items. “Slate cutting is a process of shearing, or nibbling, through the slate, rather than a guillotine action. You put the slate in the cutter face-side down. You hold the slate with one hand, and with the other hand you force the cutting edge through the slate in short strokes to nibble away at the stone. With practice any intricate shape can be cut. The slate cutter forces the exposed layers of slate away from the exposed face, and when the stone is turned over, the cut edge is bevelled away from the cut.”

An abundance of slate was quarried in Richmond and Drummond counties during the 19th century. Some of the many quarries that were active were the Glendyne Quarry (near Trenholm), the Walton, Green, Melbourne, and New Rockland quarries (near Kingsbury), the Steele Quarry (in Cleveland Township), the Acton Quarry (near Acton Vale) or the Slatington /Burke Quarry (in Shipton Township).

The Slatington Quarry near the present-day town of Asbestos was famous for the production of small slates for use in Canadian schools as well as other products made from slate. Its story is not well known, even though it was one of the earliest in the area to be mined and continued in operation for almost half a century. Although it was reported that this quarry was active as early as 1841, it was 13 years later (December 18, 1854), that the Shipton Slate Works came into existence. A viable slate business took about 10 years to develop when in 1865, Mr. Thomas P. Grosvenor, from Buffalo, New York paid $3000 to Patrick Burke to purchase Lot 7, Range 4 in Shipton Township. The name was changed to the Burke Quarry, which began production in 1867. Two years later, the quarry was sold to a group of local men, who formed the Danville School Slate Company. School blackboards were their primary product. This company declared bankruptcy in 1876. Montreal businessman Robert Miller bought the business, but it remained closed until 1886. 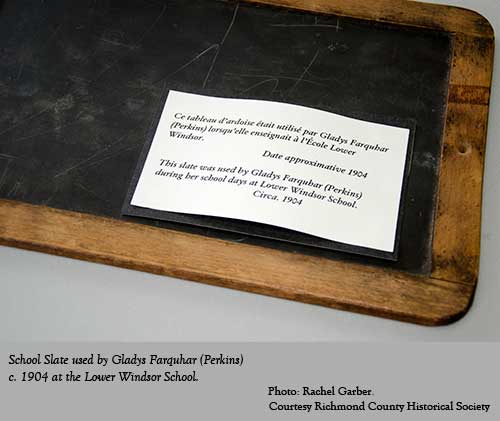 On August 4, 1886, a new company, the Danville Slate Company was incorporated. On November 22, 1886 the newspaper, Le Progres de L’Est reported that the company was making its first shipment of blackboards and that the future looked rosy. On March 25, 1887, the Weekly Examiner stated that production was going full blast, lots of orders were on hand and the company expected to double its production by spring, when it planned to add a new product, billiard table tops.

By 1886-1887, the area near this quarry was referred to as Slatington, and local folk as well as skilled labour from the area joined experienced slate workers from Wales to work the quarry. The town was comprised of many houses, a boarding house, a post office, two schools, three general stores, a sawmill, a telephone exchange, two cheese factories and a slate manufacturer. The slate products were hauled by horses to Danville, to be sent by train to all corners of Canada. In 1889-1890, the Burke Quarry employed 75 men and produced 400 crates (each containing 12 dozen blackboards) annually. This company fell on hard times, declaring bankruptcy in 1891.

Lawyer James Naismith Greenshields, a Danville native, purchased the property in 1893 and later in the same year ceded part of his interests to Moritz and Feodor Boas from St. Hyacinthe. By July of the same year, Le Progres de L’Est noted that the quarry was again in full operation. At the same time, the new owners were setting up the nearby asbestos mine while continuing to run the Danville Slate Company. In 1895, due to financial difficulty, its assets were transferred to the Danville and Asbestos Slate Company. By 1896, the quarry had closed for good. In 1897, the slate quarry and the newly established Jeffrey Mine assets were transferred to a new company formed in England through the efforts of James Naismith Greenshields called the Asbestos and Asbestic Company. Thus, while the Slatington quarry was put to rest, the asbestos industry was born.

Today, the heyday of the slate era is but a dim memory. The slate cutter reminds us that the slate industry was once a major employer in Richmond and Drummond counties and played an important role in the economy of this region of Quebec.

NOTE: In recent years, the Slatington/Burke Quarry has been reactivated by the Ardovic Slate Company of Rock Forest for the sale of slate for decorative landscaping purposes.

To Learn More
Tread of Pioneers, Annals of Richmond County and Vicinity, vol.1, p.164.
Robert Bell, “Roofing Slate as a Source of Wealth to Canada: A visit to the Walton Slate Quarry by Robert Bell, C.E., of the Geological Survey of Canada, and interim Professor of Natural Sciences in Queen’s College, Kingston (Read before the Natural History Society) 1863. http://www.archive.org/stream/cihm_54131#page/n3/mode/2up
Offensend, The Western Vermont Slate Belt: Fair Haven, Rutland, Vermont, 2003.

I am a slate cutter that could slice my way through beautiful durable stone. Designed to cut with precision, I made tiles to secure on roofs. I fashioned school blackboards upon which children could write their lessons, mark their sums and wipe their slates clean.

In the 19th century, slate mining became a commercially viable industry and was a major employer in Richmond and Drummond counties of Quebec. Slate mined in the local quarries of this region was some of the finest slate produced anywhere in the world, and graced the roofs of many fine old buildings in the province. Although the area was enriched with slate of superior quality, the slate industry’s fortunes were often unpredictable.