Smoked Meat on the Main 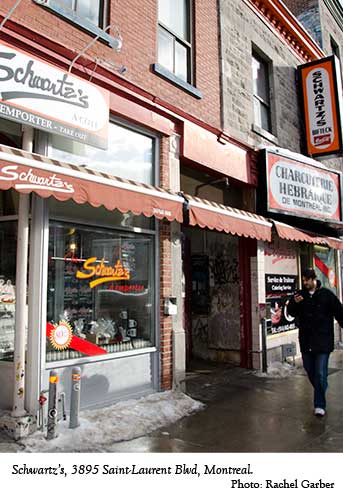 Its origins, however, are local: Schwartz’s began as a small business like countless others in the heart of Montreal’s immigrant corridor, serving a predominantly Jewish clientele. The Jewish community itself once crowded along The Main: St. Laurent Boulevard, the symbolic border between the city’s English and French halves. Today this community forms an integral part of Quebec society, albeit one that expresses itself overwhelmingly in English. Schwartz’s, too, has become a symbol of cultural harmony, drawing people from all backgrounds into its tiny premises in pursuit of world-famous smoked meat.

Montreal’s immigrant corridor emerged at the end of the nineteenth century when thousands of families from Eastern Europe arrived in Canada, most of them fleeing a rising wave of antisemitism. They settled along what was then St. Lawrence Street, running northward from the old town, and established religious and social institutions there. The city’s older Jewish community, dating back to the 18th century, was mostly British in origin and had largely integrated with the local Anglo-Protestant population. The newcomers were Yiddish-speaking, inclined towards religious orthodoxy and political radicalism, and initially not particularly interested in integrating.

However, since the more established Jews had built links with Quebec’s Protestant school system, these newcomers were obliged to send their children to Protestant schools. By the 1920s, Jews constituted upwards of 40% of the Protestant student population, much of it concentrated in a few schools on and off The Main: Aberdeen, Mount Royal, Fairmount, Strathearn, and at the secondary level Baron Byng. Because these children learned English, the Yiddish-speaking newcomers adopted it as their second, and with time first, language. National institutions such as the Canadian Jewish Congress and the Jewish Immigrant Aid Society were predominantly English-speaking bodies; they brought Jews from many social and ethnic backgrounds together to combat antisemitism, especially the closing of Canada’s borders to immigrants during the 1930s and much of the 1940s.

In the midst of this wave of immigration came two men who would have a profound influence on the city’s food scene and on intercultural relations. The first was Reuben Schwartz, a Romanian immigrant who opened a deli on The Main in 1928. There were many such establishments in the area, and for many years Schwartz’s did not particularly stand out, despite the distinctive taste brought to his meat dishes by a secret combination of spices. By all accounts, Schwartz was a difficult person to deal with and a poor businessman, although he held tenaciously to his tiny restaurant. Enter the second individual: violinist and composer from the Ukraine, Maurice Zbriger, who also settled in Montreal in the 1920s and eventually befriended Schwartz. Opinions vary as to Zbriger’s musical talent, but not regarding his skill at managing a deli; as a silent partner in the 1940s and 50s, Zbriger brought Schwartz’s around financially. Upon Schwartz’s death in 1971, he became full owner.

The deli began to attract a much broader clientele after Expo 67 when food critics and travel writers discovered its quaint charms – to say nothing of its smoked meat. American visitors noted how different it was from the pastrami they were used to: tenderer and juicier, most of them said, and 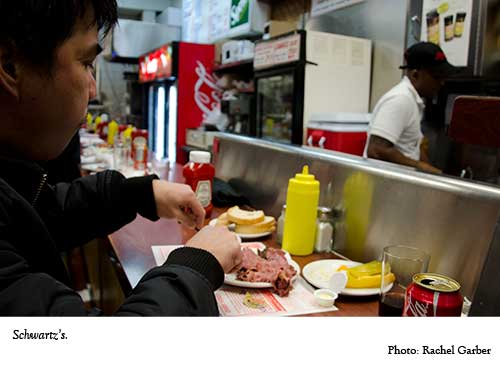 definitely tastier, given the secret spices and a cooking method arguably found nowhere else. Over the years, Schwartz and Zbriger had perfected a system of marinating meat for 10 to 14 days, at which time it would go into the huge brick smoke oven at the back of the kitchen and hang for at least another day before being sliced by hand. At no time would preservatives be added or the meat skewered to hasten the tenderizing process. For devotees, this makes Schwartz’s smoked meat second to none in the world, superior even to the famous New York pastrami – which Montrealers find dry by comparison.

In any case, news of this quality smoked meat spread beyond Montreal, and Schwartz’s brought patrons from all walks of life, including show business, politics, and sports. No doubt celebrities come for the medium-fat meat sandwiches, pickles, fries and coleslaw – a combination that has become kosher (in the sense of de rigueur) for aficionados of all cultural backgrounds, even those with only a rudimentary knowledge of Jewish culture and Eastern European gastronomic tradition – but it says something about the Schwartz’s image that, even if celebrities are only after a photo-op, the restaurant delivers on that score. Schwartz’s seating capacity of only 61 means long lineups to get in at almost all times of the day and night, but owners have resisted expanding the facilities or setting up other franchises; the charm of this hole-in-the-wall spot is a major part of its success – that and the smoke oven.

Since the Second World War, Montreal’s Jewish population has largely moved away from The Main, settling first in the Snowdon area and then in Hampstead, Côte St. Luc, and points west; most of the community’s institutions have shifted as well, including the YMHA/YWHA and the Jewish Public Library. Schwartz’s has remained. Its smoked meat has become a uniting institution for the entire city, and for all of Quebec – indeed, for the world.

Sources
Bill Brownstein, Schwartz’s Hebrew Delicatessen, Montreal, 2011.
Joe King, From the Ghetto to the Main: The Story of the Jews of Montreal, Montreal 2003.

I am the brick smokehouse in the kitchen at Schwartz’s Hebrew Delicatessen, a huge cavern of an oven inside a tiny restaurant. I am what it’s all about, what makes Schwartz’s smoked meat famous the world over. Brisket that has been marinated for at least 10 days is hung in my great interior for at least another 24 hours. Lovers of Schwartz’s smoked meat love the fact I am made of brick. They say that gives my meat’s flavour a clear edge over meat smoked in a metal oven, the way most other places do it. My fans also single out the mythical schmutz, the accumulation of fragrant smoke on my inside walls, as the factor that creates and preserves that timeless flavour. That and the spices, of course.

A typical if undistinguished business within Montreal’s Jewish community when it opened in the 1920s, Schwartz’s delicatessen has grown in reputation (but not in size) to become one of the most beloved of Montreal’s icons. It is a hugely popular eatery that visitors return to time and again. Located on St. Laurent Boulevard, supposedly the dividing line between English and French Montreal, Schwartz’s has proved a force for cultural harmony.