The word “stagecoach” usually conjures movie images associated with the Wild West, but the Stanstead County Stagecoach (circa 1880) is a vibrant reminder that these vehicles played an essential role in Quebec’s history. 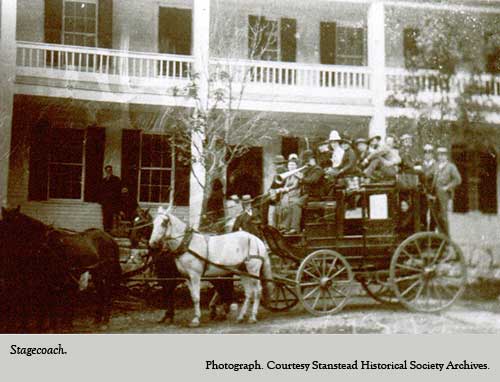 Before the appearance of trains, public modes of transportation within Quebec were limited to watercraft along major rivers and lakes, or stagecoach over land. Stagecoaches once served most regions of Quebec, and their arrival became a much anticipated recurring event of everyday life in villages along the coach routes.

Stanstead, settled by New Englanders in the 1790s, was once a major hub for stagecoach routes as witnessed by Robert Montgomery Martin in 1834: “The three great roads of the townships are 1st. From the St. Lawrence, opposite Three Rivers up the St. Francis to Sherbrooke and from thence to Stanstead; 2nd from Montreal; 3rd from Quebec to the same places… A stage coach, or stage wagon, leaves Three Rivers three times a week for Sherbrooke and Stanstead, and there is plenty of accommodation for travellers along the route.” Likewise, a stagecoach headed for Stanstead left Montreal twice a week (Martin, 1834). As early as 1810, a stagecoach route that ran from Quebec to Boston passed through Stanstead (Morin, 2010).

Even after completion of the rail system, many communities were left out of its immediate reach, and land transportation by stagecoach remained the only public transport resource for passengers and their luggage, as well as for incoming and outgoing mail. Rural areas such as the Eastern Townships, with their large network of criss-crossing dirt roads, retained some stagecoach routes much longer than other regions. In fact, Stanstead County maintained some stagecoach routes until the late 19th century.

These stagecoaches connected with the end of the railroad, delivering passengers and goods to those far flung communities not serviced by trains, or by steamer (as was the case along Lakes Memphremagog and Massawippi). Before the railroad was extended from Rock Island to Stanstead, in 1896, two coaches were used to serve the town: these were operated for years by Bert Channell, and later by Archie Walker.

The two stagecoaches were removed from service when the train arrived in Stanstead, and were eventually purchased by Mr. John Hackett, who donated one of the coaches to the Stanstead Historical Society. In 1988, Mrs. Helen Lovat Colby (who would eventually donate her own home "Carrollcroft" to the SHS, in 1992, for the purpose of housing the Colby-Curtis Museum) commissioned Mr. Royce Rand (of Milby, Quebec) to restore the old stagecoach. The restored coach is now resplendent in its original red, trimmed with black and yellow. 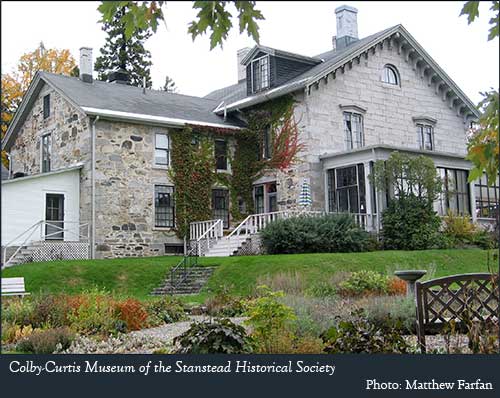 The Stanstead Historical Society has preserved this authentic sample of a late 19th century stagecoach, which is on permanent display at the Colby-Curtis Museum. Designated as a "stage wagon" by its American manufacturer Abbot & Downing of Concord, New Hampshire, this coach, constructed of wood, brass, iron and leather, is approximately 4.5 metres long, 1.8 metres wide and 2.4 metres high, and was designed to be hauled by four horses (a four-horse hitch, or “four-in-hand,” as it was called).

The Abbot & Downing manufacturer’s catalogue states a wagon of this type cost $350, and was designed for servicing the “Far West.” It seems the Eastern market generally favoured larger, fancier carriages, and this smaller model was quite uncommon throughout most of the Eastern states and Quebec. Nevertheless, since this type of wagon was manufactured in Concord, New Hampshire, it appears to have been widely distributed in neighbouring areas, such as the states of Vermont and New Hampshire, as well as just across the Canadian border, in Stanstead and the Eastern Townships.

During the early history of Quebec, the stagecoach was often the only vehicle for both public transportation and long-distance communication. Guests, letters and parcels arrived via the stagecoach; travellers and out-going mail left via the same coach. The Stanstead County stagecoach was a lifeline to the outside world for the early settlers of the Eastern Townships, and as such, played a fundamental role in this province’s history.

Authors
Brenda Hartwell is a writer and editor. She lives in Quebec's Eastern Townships. Pierre Rastoul is a museological consultant for the Colby-Curtis Museum.

I am the stagecoach that followed the old roads built generations before I made the journey. I smelled of dust and I felt the shocks through my seat cushions as I travelled desperate terrain. I carried sacks of mail and trunks packed with life's treasures, and I brought my passengers home. Brightly coloured behind my team of bays, I demonstrated my endurance with every spin of my wheels.

Stagecoaches once served most regions of Quebec, and Stanstead was once a major stop for stagecoach routes. Even after the completion of the rail system, many communities were left out of its immediate reach. Land transportation by stagecoach remained the only public transport resource for passengers and their luggage, as well as for incoming and outgoing mail. The Eastern Townships retained stagecoach routes much longer than other regions and the route in the Stanstead region was still in use until the late 19th century.