Knock on Wood, The story of the statue of General Wolfe

During the Seven Years War, Major General James Peter Wolfe (1727-1759) led the British troops to victory against the French inhabitants of New France. His boldest move consisted in scaling the cliff just west of Quebec City the morning of September 13, 1759, and attacking from the Plains of Abraham. This maneuver caught the French, led by the Marquis de Montcalm (1712-1759), completely by surprise and thus ensured its success. Unfortunately, Wolfe did not have the time to appreciate his newfound glory. During the short battle, he was shot three times and died soon after, as news of the enemy fleeing reached him.

Since New France was now under British rule, many of the soldiers from Wolfe's army opted to stay, once released from duty. Upon returning to civilian life, George Hips, a member of the 78th regiment (Fraser's Highlanders), decided to settle in Quebec City and open a butcher shop. In 1708, he bought a house from English merchant Duncan McCraw. The building was located on the corner of the streets now known as the rue St-Jean and Côte du Palais and boasted a niche on its first floor, almost right over the door. In the past, a statue of St-Jean Baptiste had probably occupied the space. To fill it, Hips commissioned a wooden rendition of his fallen general from the Chaulette brothers, Yves and Hyacinthe.

The Chaulette brothers were carpenters, not sculptors. However, by studying engravings and with the help of James Thompson, another former soldier, the brothers managed to carve a likeness of Wolfe. According to Thompson, the end results were far from satisfying. Nevertheless, the sculpture was secured into place upon completion. With its bright red coat and dramatic pose, the left hand pointing straight (but inexplicably) towards the Old Port, the statue certainly had character.

Unfortunately, many French-speaking residents felt insulted by it; after all, it was, indirectly, a reminder of their defeat. From the English side, the anger came from the fact that the statue did not meet expectations. For one thing, it was considered too short, measuring only1.5-metres (5 feet) including the base. More importantly, it did not resemble the general. In the following years, it would often be pulled from its perch and thrown on the street by unknown individuals, requiring frequent repairs by the subsequent owners of the house.

In the summer of 1838, two sailors who had enjoyed a rather nice evening at the nearby Hotel Albion, decided to steal the statue and carry it to their ship, the H.M.S. Inconstant. Witnesses who saw the two men carrying it simply thought they were supporting a third fellow who had taken a drink too many. Anyhow, the ship cast off from Quebec with its new mascot and sailed for some time, going as far south as Bermuda then crossing the ocean to finally stop in Portsmouth, England. There, the statue was assigned a new duty and served as a sign for a pub. After a couple of years, it was sent back to Quebec City in a box addressed to the mayor. Curiously, the inside of the box was covered with stamps of all the ports visited.

The statue, now back in place, stayed there until 1847 when the current owners, Francois Evanturel and Isaac Dorion, had the building demolished and reconstructed. This time, to avoid further incidents, the niche was upped one story, therefore becoming out of reach of anyone with questionable intentions. Wolfe's statue was to remain in its new home as a local landmark for the next 50 years.

In 1898, the new owners of the house, the Bell Telephone Company of Canada, concerned about the condition of the statue, had it restored. The President, Mr. Sise, felt however that it would be unwise to put it back outside, describing the wood as old and brittle. After half a century of Canadian weather, the figure was in fact in a serious state of decay and would not have withstood many more years. It was therefore not returned to its niche, much to the discontent of some of the local residents. By now, the people had become accustomed to it and the area had been called ''Wolfe’s Corner'' for quite some time. So these citizens pressured the City to reinstall their ''beloved'' Wolfe. After careful consideration of the matter, it was decided to commission a new rendition of the Major General to replace the previous one. 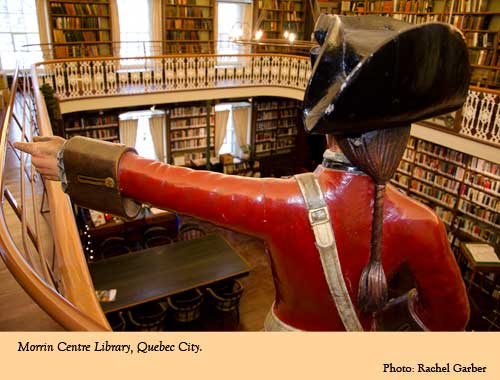 On the anniversary of Wolfe's death, September 13 1901, a brand new statue by wood-carver Louis Jobin (1844-1928) was inaugurated. This one was slightly taller, measuring closer to 1.8-metres (six feet) with its pedestal. The left leg was slightly pulled back and the right arm was now the one pointing away, this time westwards towards the Plains of Abraham (a more logical direction than in the former statue).

This figure remained at its post until February 11, 1964, when three men brought it down early that morning, saying to any curious bystanders that it was going to be repainted. It was however quickly discovered that the owners had been ''strongly'' advised to take down the statue or the building would be burned (strong anti-British currents were still being felt throughout the population). Hence the figure had been sent to the museum of the Citadelle de Québec for safety where visitors can still see it today.

So what happened to the original version? Well, after its restoration, it was donated to the Literary and Historical Society of Quebec, the oldest learned society of Canada. It was placed inside the library of the Morrin Centre to preserve it both from the elements and mischievous passersby. Yet its tale does not end there. In 1966, Wolfe once more faced danger when an Argentinean student protesting against the occupation of the Falkland Islands entered the library with two Molotov cocktails in the hopes of burning the statue. Fortunately his attempt failed and the statue was unharmed, but the library lost approximately 500 books due to the subsequent fire. The student was judged and deported to his homeland.

To this day, the statue remains atop its perch in the library of the Morrin Centre, proudly gazing over its visitors, its coat a vivid red, and its hat a glossy black...knock on wood.

Author
Having recently obtained his BA in History, Benjamin de Sève-Simard has now undertaken his Master’s degree in Education at the Université de Sherbrooke. For the past few years, he has worked as a tour guide in two different institutions, the Uplands Cultural Centre in Sherbooke and the Morrin Cultural Centre in Quebec City.

I am the wooden incarnation of the man who successfully led the British troops on the Plains of Abraham in 1759. I stood proudly for many years on my pedestal on the corner of St-Jean and Côte du Palais, seeing generations of inhabitants pass under my feet as I pointed the way to the Old Port. I withstood many falls, earning many cuts and bruises, and was even kidnapped. But finally I returned to Quebec City to end my days in a quiet library. Thankfully, I am still in one piece...knock on wood!

General James Wolfe is a man not easily forgotten. A statue was sculpted to his image and was placed in a niche in the corner of a butcher shop in Quebec City. At first, the statue was not liked by the general public. Often, the inhabitants would throw it down from its perch. At one point, it was even stolen by sailors. It was returned eventually and it was placed, after a few years, in the library of the Morrin Centre where it still stands to this day. The statue remains, if not a controversial symbol, most definitely a conversation piece.