The “Symmes Hay Cap” was a common tool used among farmers in the Eastern Townships from the 1880s until use of the mechanical hay baler became widespread in the late 1930s. Hay caps were placed atop fresh-cut hay in cone-shaped stacks, or “cocks,” which farm hands piled in the fields with pitchforks. The hay would ferment and lose nutritional value if exposed to rain. The caps protected the hay until it could be moved under permanent shelter in the loft of a barn or stable. The 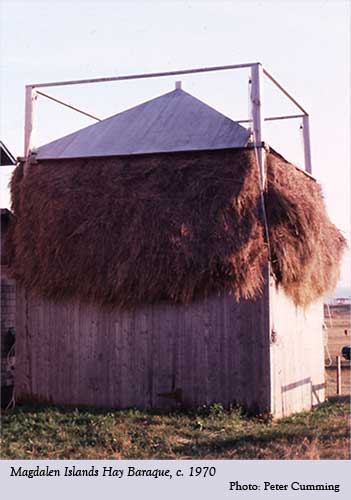 only alternatives for farmers were cumbersome and expensive canvas tarpaulins, or the medieval “baraque” (barrack), which originated in Catalonia in the 13th century. The “baraque” was a quaint little square barn with a sliding roof controlled by a pulley system that was used to store hay and protect it from bad weather. In North America, they could only be seen on the Magdalen Islands and to this day, a few farmers in Havre-Aubert still use them.

Local folklore relates that the “Symmes Hay Cap” was developed in the Sawyerville area in the 1880s. At this time the Eastern Townships English-language community was at the forefront of both agricultural and manufacturing development in Canada.

On January 13, 1893, the Secretary of State of Canada granted Letters Patent to a group of prominent, mostly English-speaking investors from Sherbrooke, Compton Township, and the towns of Cookshire and Sawyerville, “for the manufacture and sale of Symmes Patent Hay and Grain Caps and Vegetable Covers and other articles of similar nature.” However a delightfully descriptive 1889 letter to the prestigious magazine "The Cultivator & Country Gentleman," shows that the caps were already in large-scale commercial use in the Sherbrooke area as early as 1887:

To the editors of the Cultivator & Country Gentleman, July 11, 1889

Eds, Country Gentleman – This being my third year’s experience with the pulp hay caps, manufactured by the Symmes Hay Cap Co., I thought a few hints to those who are about using them might not be ill-timed. My plan for distributing them and placing them is to send the boy and the horse (as soon as they have finished raking the hay into winrows) for the hay caps previously placed in two piles on an ordinary stone drag, the boy dealing them out right and left as the horse walks between every alternate row of cocks (or winrows if the men have not had time to do the cocking), the men also placing them firmly in position while the boy and horse are free to continue raking elsewhere. This occupies but a few minutes and although the caps are strong it saves them from being broken, as when pitched on and off from a high waggon. The following day, as soon as the chance offers, the same boy gathers up the caps on his drag, and either moves them to another field at once or leaves them in readiness for future use.

As to tying them on, practically I find it not necessary, for when they do blow off they seldom go far, and there is usually a lull before the rain sufficiently long to enable their being replaced. One hundred caps can usually be made to cover five tons of hay, and the saving in time and quality of the hay is of inestimable value. In making and curing clover in the cock, it has brought the operation to so simple and safe a method as to relieve one from all anxiety, and when haying and harvesting are over, I still continue in using them in protecting piles of potatoes and other root crops from sun, rain, and even frost; and in piling (?) apples and other fruits in the orchards before barrelling, they insure their safe keeping, even though the rain and frost may be severe.

As I write, the third rainy day has set in upon my first cut five tons of timothy, as I watch the water running from the fluted sides of the pulp hay caps, as it has done on and off for the last 48 hours, I can most cheerfully enjoy the thought, “What glorious growing weather this is for the root crops."

Although it is unclear according to the few available records, it appears that the Sawyerville company had a New England counterpart. The following advertisement, including an illustration, appeared in the Cultivator & Country Gentleman on April 18, 1889:

The Symmes Patent Hay & Grain cap
Made of Wood Pulp thoroughly Waterproofed; Cheap and durable – half the price of canvas. One hundred will cover six to eight tons hay. Not necessary to fasten down. Will send half a dozen or more as samples, for thirty-seven and half cents each, here. Symmes Hay Cap Co., Concord, N.H.

Which came first – Sawyerville or Concord? The historical records to be found are unclear. However it would seem that the hay caps were in commercial use in the Eastern Townships while still at the experimental stage in the United States. The hay caps are a clear example of the industrious and forward thinking nature of many of the Eastern Townships' farmers who came and settled in this region. Although rooted in the traditions of their ancestors, English-speaking farmers were innovative in their methods to improve scientific advancements in farming practices.

I am a haystack cover that was used in the fields of Eaton Corner, Quebec. I sheltered the stacks of hay that had been gathered together, and protected them from wind and weather. I protected the hard work of the field hands who laboured the day, and ensured that their work would not be for nought.

The “Symmes Hay Cap” was used among farmers in the Eastern Townships from the 1880s until use of the mechanical hay baler became widespread in the late 1930s. Haystack caps were placed atop fresh-cut haystacks. If exposed to rain, hay would ferment and lose its nutritional value for the livestock. The “Symmes Hay Cap” was developed in the Sawyerville area in the 1880s at a time when the Eastern Townships English-language farming community was at the forefront of both agricultural and manufacturing development in Canada.