Who would have thought that a mere and humble bean could have played a significant role in the history and agricultural heritage of the English-speaking community of Quebec? Read on and discover a fascinating story about an object that is not really an object and an artefact that is not entirely an artefact.

As a practicing gardener and a passionate and committed saver of heirloom seeds, I was pleasantly surprised to discover that I “curate” a certain variety of bean that figures into the agricultural history of the region within which I now live. Like all heirloom vegetable varieties, the “True Red Cranberry Pole Bean” predates the existence of commercial seed companies and industrial agriculture itself. Rather than being a static and material artefact of the past, the bean, consistent with the definition of heirloom varieties, is a living link to our past because it has been handed down through generations of gardeners and farmers and is still grown by heirloom enthusiasts to this day.

But what is its history and what are its origins? And more importantly, how does it significantly figure into Quebec Anglophone heritage and culture?

Like many heirlooms of its kind, its origins are somewhat lost in the mists of time, but there are a number of significant clues and pieces of evidence we can piece together to tell the story.

The story starts with the first peoples of the region which currently includes Quebec – the Abenaki - which literally translates “people of the dawn land” – or “easterners.” The traditional territory of the Abenaki confederacy comprised what is now northern New England, Quebec and parts of the Maritime Provinces. The Abenaki practiced what is known as “swidden agriculture,” which was a method of growing food crops within a largely forested environment. Corn, squash, sunflower and beans – all of which were “New World” crops – were planted seasonally in small, temporary forest clearings. Bean varieties initially became available to the Abenaki through trade routes with more southerly first peoples. The “centre of origin” of New World beans was originally Mesoamerica (Central America).

By the time the first European colonizers and early settlers arrived in the region, starting in the mid 16th century, Abenaki peoples had developed a suite of regionally selected and locally adapted crop varieties. Over the ensuing several centuries, when borders were still very much permeable and both indigenous and settler populations were in flux, many of these crop varieties became available to settlers of European descent throughout the region, including here in Quebec.

Before the mid-nineteenth century, commercial seed companies did not exist in North America. Settlers, who were mostly farmers, acquired the seed stock for their crop varieties through informal trade and the dynamics of community seed saving. As the seed trade came to be commercialized in the latter half of the nineteenth century, there is plentiful evidence that several regional seed houses carried the specific bean variety True Red Cranberry. One such reference occurs in the English language William Ewing and Company Seed Catalogue, of Montreal, Quebec in 1899, which cites the variety as “A well-known, productive variety with green pods.”

A more specific and colourful reference is found in the Canadian Fruit, Flower and Kitchen Gardener of 1872: 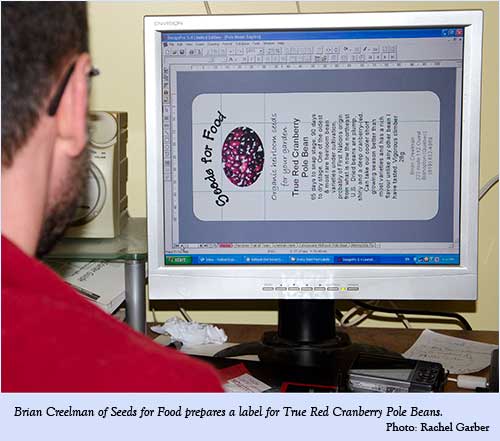 An old and favourite sort, one of the most hardy and productive of its class, and more generally cultivated than any other pole bean. It will ripen its crop in about three months from the time of planting. It is frequently used as a string bean, the pods being tender and succulent, and retaining this character for a long time, but its chief value is as a shelled bean, used before it has become ripe. The beans are of a deep purple colour.

This rare variety, in recognition of its historic and cultural significance to our region (northern New England/southern Quebec) is still offered by a few seed companies such as Fedco seeds in Maine, who describe the variety as follows:

“…The plump round maroon seeds without streaking look like Thanksgiving cranberries, unlike the speckled oval bush cranberry types. One of our oldest varieties, probably Native American, True Red Cranberry is listed on Slow Foods’ Ark of Taste.”

As an English-speaking resident of Quebec’s Eastern Townships, I consider it a privilege to be a contemporary steward of this variety, for its heirloom status and storied history played a significant role in the agricultural traditions and food ways of our agrarian predecessors here in the province of Quebec.

Author
Brian Creelman is a long time gardener and passionate seed saver. He lives in the Eastern Townships where he works to preserve and promote the conservation and use of rare and endangered heirloom vegetable varieties through his small seed company “Seeds for Food.”

Is it possible to get some of these seeds?

I am the True Red Cranberry Pole bean. I have heirloom status amongst other bean varieties. Despite my age, I am hardy and plump and a lovely burgundy colour. I have been around for centuries, long before I made my way into 19th century seed catalogues.

The True Red Cranberry Pole Bean pre-dates the existence of commercial seed companies and industrial agriculture itself. Rather than being a static and material artefact of the past, the bean, consistent with the definition of heirloom varieties, is a living link to our past. It has been handed down through generations of gardeners and farmers and is still grown by heirloom enthusiasts to this day.