But if one digs a little deeper, there is evidence that this is only part of the picture. Following the Price Lumber Company’s development in the Saguenay shows a parallel journey to the awakening of Quebec and the beginning of two cultures living together.

The first William Price ( b.1789 in England ) arrived in Quebec at the age of 20, learning the lumber business inside a company of a family friend. He travelled the forests of Vermont, the Ottawa valley and Upper Canada, selecting straight trees for masts and square timber for planks, all of it sent home to England.

After serving as a major in the War of 1812, he came back to Quebec to find the company he had worked for in ruins. Falling back on his skills in forestry, he partnered up with three other investors, took on the timber export side of the company and founded the William Price Company in 1821.

To secure his place in the new firm, Price began “contracting,” a business practice he invented, to build up his equity and influence. He would approach small sawmills in Lower Canada, convince them to take on a large order for wood planks, and then offer them financing to complete the job. Although the contracts provided work for many labourers, it wasn’t long before sawmills in Batiscan, Saint Vallier, Rimouski, Métis, La Malbaie, Moulin-Baude and By-Town (Ottawa) were all on Price’s company books. He was, in fact, an owner long before he held legal title.

Price then “contracted” his way through the Saguenay region. He financed and persuaded a group of squatters to settle along its principal tributary rivers, where they built nine sawmills and set up a community known as the “Vingt-et-un.” Soon, Price was loading planks at the port of every mill, bound for England. Two years later, he purchased all the sawmills and welcomed large numbers of settlers into the area. By 1843, the government put the land up for auction and Price started buying more sawmill sites, whole counties and huge reserves of timber.

Price was a controversial businessman and land-owner, praised by some, vilified by others. In 1849, some daring settlers sent a petition to Governor Lord Elgin denouncing Price’s monopoly of land, saw mills and blocked waterways. Price defended himself with this testimony from a labourer on his land: “Grandfather Price, I came here with my wife, my eight children and barely enough to eat. Now I am all right, thanks to you.”

William Price had 14 children and sent his sons to work in the company. In 1851, he founded the William Price & Sons Company which marked the gradual transfer of power to sons David Edward, William Evan and Evan John Price. The brothers were excellent managers. However when William Price died in 1867, the business was stable but stagnant. The decline in shipbuilding and timber exports to England directly affected the company and by the turn-of-the-century, the Price empire was on the verge of bankruptcy.

When Evan Price died in 1899, his nephew William Price III took control of what had become Price Brothers & Company Limited. William Price had a sixth business sense. He saw that a new direction was needed for the company and pinned his hopes on pulp and paper. He started churning out cardboard and harnessing hydro-electric power from the ports the Price family had acquired. By 1910 the company was simply known as Price Brothers Limited. In 1915, Price was awarded a knighthood for his role in organizing the military camp at Valcartier during World War I. 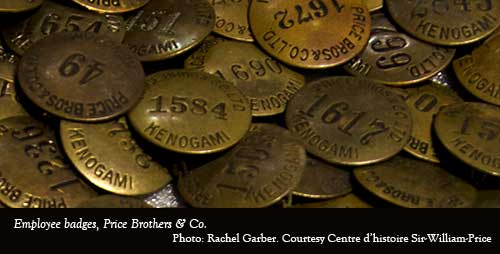 In 1912, Price bought the name Kénogami (long lake) for $200 and commenced to build the first “company town” in the Saguenay. He designed everything from the direction of the streets to the location of the paper plant. Running through the middle of the town were railroad tracks, ending at the factory, where box cars would deliver the pulp and pick up the resulting cardboard and paper products.

On one side of the tracks was the workers’ compound. French was spoken in the streets (but English was the language at work) and the company built small, unadorned housing units for the labourers and their families. Although most of the workers were Francophones, there were also other ethnic groups from Europe and Asia, setting up new lives as immigrants.

On the other side of the tracks were the Anglophones and business managers. Houses were elaborate and brick, sporting a very British architecture. Well tended, lush gardens and trees decorated each lawn and public area.

Until the 1940s, inhabitants from both sides of the track rarely crossed over and there are stories of people being chased back to their proper side in a hail of thrown rocks. But after the war, when the economy was booming again, the two sides began to mix, at first while attending sporting events and finally through shared cultural interests. The English started learning French and the French tried their hand at English. 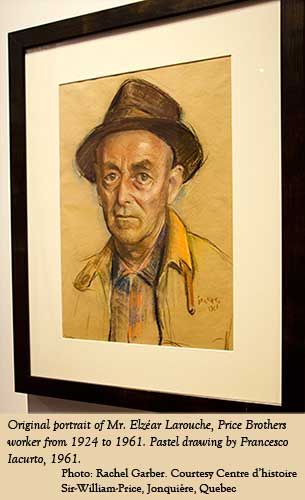 Sir William Price was much more appreciative of his workers’ contribution to the business than his grandfather had been. Sir William broke language barriers, hiring Hector Simon as his engineer and trusted manager, the first Francophone engineer in Quebec. Sir William’s son, John Herbert Price, learned about a company policy at Molson’s where workers were honoured for great service and he, along with Simon, created such a program at Price Lumber. Each year, an employee who showed merit and was highly respected among all employees, would get his portrait painted as a gift. Many of these portraits are on exhibition today at the Centre d’Histoire Sir-William-Price in Jonquière.

In a sad twist of fate, Sir William Price died in October 1924 at the lumber yard at the Kénogami plant. He was examining a hole left by a cave-in when a landslide swept him and two engineers into the Rivière aux Sables. His sons John Herbert and Arthur Clifford, who were both in their early twenties, succeeded him at the helm of Price Brothers. They did not enjoy the financial success of their father, and during the depression of the 1930s, Price Brothers and the members of the founding family lost control of the business.

A few of William Price’s descendants continue to live in the Quebec City region, where they own interests in the pulp and paper and lumber industries. The Centre d'histoire Sir-William-Price preserves the history of the Saguenay, the importance of the timber industry and the influence the Price family had in the region.

To Learn More
Quebec Official Gazette, (1899 – 1924).
Pulp and Paper Magazine of Canada (Gardenvale, Quebec) from 1905 – 1913.
Price Brothers letters and business documents at the National Archives of Canada.
Joseph Bouchette, The British dominions in North America; or a topographical and statistical description of the provinces of Lower and Upper Canada (2v., London, 1832).

Author
Janet Torge is one of those people who love to mix it up. She’s a TV documentary producer, writer, prenatal teacher, newspaper columnist, researcher, archivist and creator of Radical Resthomes, her housing vision for the future. Follow her exploits at www.torgeahead.com.

The timber taken from the felled trees in the Saguenay Region was used to make long, perfectly straight masts for the British Admiralty during the Napoleonic wars. Planks from the forests of Quebec were used in ship building for England’s fleet in the War of 1812. Later, the trees were used to make pulp which was then processed into paper. The company which harnessed all the manpower to develop these resources was the William Price Lumber Company, specifically William Price and later his grandson, Sir William Price. The Price name is directly linked to the development of the Saguenay-Lac-Saint-Jean region. More than any other, it evokes the expansion of forestry, sawmills, and the pulp and paper industry. For over 150 years, the Price family left its mark in the collective memory of the local population.